Showing posts from July, 2019
Show all

The Bride's Trunk by Ingrid Dixon: A Book Review 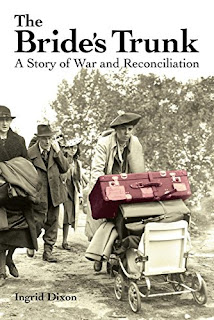 The Bride’s Trunk: A Story of War and Reconciliation Author: Ingrid Dixon Genre: History, Nonfiction, Biography Publisher: Cloudshill Press Release Date: 2016 Pages: 228 Source: This book was given to me by the author in exchange for an honest review.  Synopsis: A true story of love and reconciliation in the aftermath of the Second World War.      Minny leaves Germany on a bitterly cold morning in December 1946 and travels to England to marry Jim, a British Intelligence Corps soldier in the Allied armies that defeated the Nazi regime in 1945 and occupied the devastated nation. She has survived British and American bombs and witnessed the destruction of Aachen, her ancient and beautiful city. How will a German woman cope in austere post-war Britain, where she is still regarded as the enemy?      Illustrated with almost 100 images and original documents, The Bride’s Trunk describes the adventures of an unremarkable piece of luggage and three generations of its owners, whose j
Post a Comment
Read more
More posts