Princess of Thorns by Stacey Jay: A Book Review 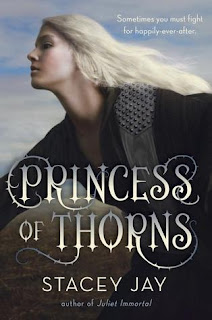 It’s been ten years since Princess Aurora’s mother, the Sleeping Beauty, sacrificed her life to give her daughter her magical powers. Aurora knows that magic is never free. The price for hers is that she will never know romantic love.

Prince Niklaas is living on borrowed time. Unless he is able to convince a princess to marry him before his eighteenth birthday, he will meet the same terrible fate as his ten older brothers.

When Niklaas and Aurora meet under unusual circumstances, they must race to prevent the fulfillment of an ogre prophecy foretelling the end of human life. But will they be able to break their curses?

My review: The story is a mashed-up fantasy story based off of the original fairy-tales. The hero of this story is Sleeping Beauty’s daughter, Aurora, who through her mother’s sacrifice, is gifted with strength and skill in combat so she can reclaim her kingdom that was stolen from her by the evil ogre queen, Ekeeta, and rescue her brother, who is held prisoner. In order to accomplish her task and to keep her identity hidden, Aurora disguises herself as a boy. Along the way she meets, Nicklaas, a prince from a neighboring kingdom, who is hoping to marry Princess Aurora to save himself from a terrible fate. Not realizing that she is the princess he is looking for, he becomes her companion hoping that she will lead him to Aurora, not really knowing what he is really bargaining for. Will the two of them be able to defeat the ogre queen and help save the kingdom? Or, most importantly, can the two of them be able to love another and trust each other once their lies are revealed?

This story is told through the eyes of Aurora, Niklaas, and with a little bit of the villain, Ekeeta. Aurora is both blessed and cursed. Aurora is strong, yet at the same time she is vulnerable. She is stubborn, loving, merciful, passionate, and smart. She also has her faults; she can be manipulative, selfish, and downright ruthless. She is capable of doing the most cruelty in order to get what she wants, which is to save her brother, and later on Niklaas. Still this makes her human, and because she is spirited and witty, she is a lovable character. She makes mistakes and learns from them. At first, I didn’t like Niklaas for he was selfish, narcissistic, and arrogant. However, in the end, Niklaas grew on me. It turns out that he actually has a heart of gold. Niklaas is that way because his father hates him. Niklaas grows a lot throughout the book. He beings to care for others besides himself, and he becomes more mature and responsible. He is a great fit for Aurora.

The book mostly has no action until the ending of the book. The book involves them traveling trying to find an army that is willing to fight against the ogre queen. Throughout that time, it mostly focuses on the relationship between the two leads. However, the dialogue is funny and witty. Their relationship started as friendship, and soon began to care for one another. Two thirds of the book, it felt rushed. It felt like the author wanted to hurry up and end the story. It felt like their romance was forced, and I wished the author had written the story a bit longer, so that the romance felt more natural.

Overall, the story is about friendship, love, forgiveness, and redemption. The story is very slow-paced, and has a very predictable plot. There is no action until the last few pages of the book. Until then. the author’s pace is reminiscent of a long, scenic road trip. However, there is a lot of fun surprises along the way, including some encounters of our beloved fairy-tale characters. This is a fun, light-hearted story that will be sure to delight fairy-tale lovers.

January 18, 2022
Join us for this tour from Jan 10 to Feb 4 ,  2022 ! Book Details: Book Title : Peccadillo at the Palace (An Annie Oakley Mystery) by Kari Bovee Category :  Adult Fiction (18 + yrs), 332 pages Length: 9 hours, 52 minutes Genre :  Historical Mystery, Cozy Mystery Publisher :  Bosque Publishing Release date:    April 2020 ​ Formats available for review : audiobook (audible download), MOBI (for kindle), EPUB, PDF) Tour dates : Jan 10 to Feb 4, 2022 Content Rating :  PG +M for mature themes, mild swearing Book Description:      She’s outgunned her opponents at every turn, but will it be enough to solve a royal case of murder? Annie Oakley can’t believe her good fortune at an imperial invitation.      Queen Victoria wants Buffalo Bill’s Wild West Show to perform for her Golden Jubilee. But during the voyage to England, a royal escort is murdered and the gun-slinging star finds herself at the center of an assassination plot against the crown.      Determined to catc
Post a Comment
Read more