Marie Von Clausewitz: The Woman Behind The Making Of On War by Vanya Eftimova Bellinger: A Book Review 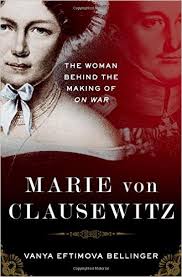 Marie von Clausewitz: The Woman Behind the Making of On War
Author: Vanya Eftimova Bellinger
Genre: Nonfiction, Biography, History
Publisher: Oxford University Press
Release Date: October 1st, 2015
Pages: 312
Source: Netgalley/Publisher in exchange for an honest review.
Synopsis: The marriage between Carl von Clausewitz and Countess Marie von Brühl was a remarkable intellectual partnership. Many historians have noted the instrumental role Marie played in the creation, development, and particularly in the posthumous editing and publishing of Clausewitz's opus, On War, which remains the seminal text on military theory and strategic thinking. Highly intelligent and politically engaged, Marie was also deeply involved in her husband's military career and advancement, and in the nationalist politics of 19th-century Prussia. Yet apart from peripheral consideration of her obvious influence on Clausewitz and on the preservation of his legacy, very little has been written about Marie herself.

In Marie von Clausewitz, Vanya Eftimova Bellinger proposes to address this oversight, capitalizing on the recent discovery of a vast archive of material―including hundreds of previously unknown letters between Marie and Clausewitz―to produce the first complete biography of this understudied figure. Delving into the private correspondence between the two, Bellinger shows how Marie, a highly educated woman of Prussia's upper echelon, broadened Clausewitz's understanding of the cultural and political processes of the time; provided him with insights into the practical side of daily politics; sharpened his writing style; and served as the catalyst for his ideas. The depth of her influence on and contribution to Clausewitz's theoretical writings, Bellinger argues, is greater than historians have previously suggested. Bellinger also establishes Marie as an impressive figure in her own right, both politically outspoken and socially adept at moving among the ranks of Prussian nobility. The marriage between Marie, an intimate of the royal family, and Clausewitz, an obscure young lieutenant with dubious claims to nobility, allows Bellinger to engage in a broader discussion of gender and class relations in 19th-century Europe; and her study of their epistolary debates also sheds light on the political climate of the time, particularly incipient German nationalist fervor.

Marie von Clausewitz was the daughter of a nobleman and was a member of the royal court where she served as lady-in-waiting. When Marie married Carl von Clausewitz, she had actually married down. Carl was not of noble blood and he was an officer in the Prussian army. Yet after two years of flirtation and after much time of consideration, Marie agreed to marry him. It would be years until they finally married, but when they did it was a happy one. The reason that Marie chose to marry him was because he treated her as an equal intellectually. He let her be actively involved in politics. Marie was an intellectual and was very much allowed to  share her views of politics. She also accompanied her husband to the battlefield. It was through these ideas and experiences that helped influence Carl’s unfinished work, On War.

Overall, this biography gives us a different perspective of Marie von Clausewitz, who has often been in the background to many historians. In fact I did not really know much about Marie, I have only heard of Carl von Clausewitz and his classic work, On War. Reading this biography was an eye-opener. It showed us how influential Marie was on his works and her accomplishments. It also showed us the deep respect Marie and Carl had for each other. They loved each other's intellect, and even discussed political views they had at the time. This book is not only a good biography, but I also thought it gave a comprehensive look at the politics and social issues of Germany during their era. While this book is comprehensive to the average reader, it is very dry. I found the book writing style to be dull at times, so occasionally I stopped reading this biography and started reading another book and then come back to it later on. Still, I find this book to be a great tribute to a fascinating woman, and I hope that there will be more biographies of this subject. Marie von Clausewitz is just as important as Carl von Clausewitz, and hopefully history will give her the credit she deserves.

January 12, 2022
Join us for this tour from Jan 10 to Feb 4 ,  2022 ! Book Details: Book Title : Girl with a Gun (An Annie Oakley Mystery) by Kari Bovee Category :  Adult Fiction (18 + yrs), 316 pages Length : 9 hours, 24 minutes. Genre :  Historical Mystery / Cozy Mystery Publisher :  Bosque Publishing Release date:    April 2020 Content Rating :  PG + M: Mature themes, mild swearing  Source : This audiobook was given to me by iReads Book Tour in exchange for an honest review.   Book Description :      She’s on the rise to fame and fortune, but her sudden notoriety comes with some deadly consequences.      Annie Oakley thrives as a sharpshooter in the Wild West Show. Finally, she has a chance to save her family’s farm—and make her dreams come true.      But her act misfires when she discovers her Indian assistant dead in her tent. Uncovering a shocking secret from her assistant’s past, the girl with the gun believes it’s murder. Determined to find the truth, she ruffles some horse
1 comment
Read more