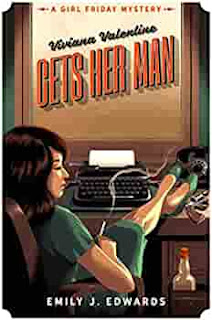 New York City, 1950. Viviana Valentine is Girl Friday to the city’s top private investigator, Tommy Fortuna. The clients can be frustrating, and none more maddening than fabulously wealthy Tallmadge Blackstone, who demands Tommy tail his daughter, Tallulah, and find out why she won’t marry his business partner, a man forty years her senior. Sounds like an open-and-shut case for a P.I. known for busting up organized crime—but the next day, Viviana opens the office to find Tommy missing and a lifeless body on the floor.

The cops swoop in and Detective Jake Lawson issues a warrant for Tommy’s arrest. Desperate to clear Tommy’s name, Viviana takes on the Blackstone case herself. When she goes out for a night on the town with the heiress, she begins to learn the secrets behind Tallulah’s headline-grabbing life. Meanwhile, Lawson is itching to solve his murder case, and continues harassing Viviana for answers—until she’s the victim of a series of violent attacks.

But Tommy’s still missing, and Viviana is scared. As she digs into the dirty history of the Blackstone empire, she suddenly realizes the true danger at hand. Now, it’s up to her to find her missing boss and make sure he doesn’t turn up D.O.A.

My Review: Viviana Valentine is the Secretary to a private investigator named Tommy Fortuna. One of his wealthy clients hires him to find out why his daughter will not marry her fiancé. During his investigation, Viviana finds a body in Tommy’s office. When Tommy goes missing, it is assumed that he is the murderer. Viviana sets out to clear her boss’s name. Along the way, she finds that both cases may be connected.

I found Viviana to be a very frustrating protagonist. Mrs. Edwards tries to depict her as a sassy heroine who tries to solve crimes. However, Viviana comes off as crude and crass. She is very judgmental to everyone around her and believes that she is better than everyone around her. Because of her selfishness, I found her very off-putting. I hoped that throughout the novel, she would undergo massive character development. However, she stayed the same throughout the novel. Thus, Viviana was not a very endearing character.

Overall, this novel is about friendship, feminism, and high society. The supporting characters were bland and forgettable. The story was slow and predictable. It was filled with all the typical cliches of a mystery novel. Therefore, there were really no twists and turns in this story and the case can be solved pretty easily. Mrs. Edwards’s writing style did not appeal to me and was very off-putting. I did not find her novel to be very funny at all. Viviana Valentine Gets Her Man is a cozy historical novel that will appeal to fans of light mysteries. However, this novel simply did not work for me. I hope that in the next book in the series, Viviana will be more developed and will have stronger writing. I recommend this novel for fans of The Secret Life of Anna Blanc, The Darkness Knows, and Death on a Deadline!