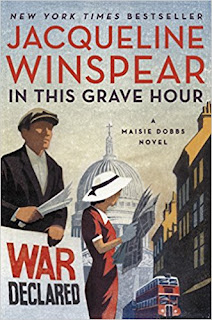 In This Grave Hour (Maisie Dobbs #13)
Author: Jacqueline Winspear
Genre: Historical Fiction, Mystery
Publisher: HarperCollins
Release Date: March 14, 2017
Pages: 398
Source: Publisher in exchange for an honest review
Synopsis: Sunday September 3rd 1939.  At the moment Prime Minister Neville Chamberlain broadcasts to the nation Britain’s declaration of war with Germany, a senior Secret Service agent breaks into Maisie Dobbs' flat to await her return. Dr. Francesca Thomas has an urgent assignment for Maisie: to find the killer of a man who escaped occupied Belgium as a boy, some twenty-three years earlier during the Great War.

In a London shadowed by barrage balloons, bomb shelters and the threat of invasion, within days another former Belgian refugee is found murdered.  And as Maisie delves deeper into the killings of the dispossessed from the “last war," a new kind of refugee — an evacuee from London — appears in Maisie's life. The little girl billeted at Maisie’s home in Kent does not, or cannot, speak, and the authorities do not know who the child belongs to or who might have put her on the “Operation Pied Piper” evacuee train.  They know only that her name is Anna.

As Maisie’s search for the killer escalates, the country braces for what is to come.  Britain is approaching its gravest hour — and Maisie could be nearing a crossroads of her own.

My Review: On September 3rd 1939, Chamberlain has declared war on Germany. On that same day, Francesca Thomas, a Secret Service agent, asks Maisie to look into the case of the murder of a Belgian refugee who had emigrated to England during WWI. As Maisie looks into the murder, she learns that there have been other Belgian refugees that have been murdered. Are these cases linked? If so, how? In the meantime, a London evacuee shows up on Maisie’s doorstep. No one knows who the girl is except for her name Anna. Maisie hunts down the killer and looks for more information into the mysterious Anna.

Now that Maisie has set up her detective agency, Maisie has restored some of her old charm. She is trying to rebuild her life after the death of her husband, James. However, she appreciates the good things in life. Maisie also hates the announcement of the war, but realizes that Hitler must be stopped at all costs. She is compassionate and wants to contribute. She also empathizes for Anna and see lot of herself in her. Thus, Maisie tries to help make Anna more at ease in her home.

Overall, this book is about the early beginnings of WWII. The characters are very likable, and I love that there were more appearances from the characters that we have come to love in the series. They are all concerned about WWII and are trying to find ways to contribute. The mystery itself was fascinating. It was very fast-paced and it read like a thriller. I think that this is one of the best books in the Maisie Dobbs series. I finished this book really quick, but I wished that I would have taken my time a bit more because now I will have to wait for the next installment in the Maisie Dobbs series. Thus, for fans who have been discouraged to read this because of the disappointment in the last Maisie Dobbs books, you will have faith in the series once again with In This Grave Hour! I can’t wait for the next book, I hope it comes out soon! In This Grave Hour proves once again why Jacqueline Winspear’s Maisie Dobbs has won many hearts across the globe. 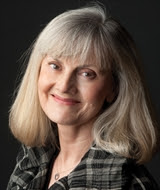 Jacqueline Winspear is the author of the New York Times bestselling Maisie Dobbs series, which includes In This Grave Hour, Journey to Munich, A Dangerous Place, Leaving Everything Most Loved, Elegy for Eddie, and eight other novels. Her standalone novel, The Care and Management of Lies, was also a New York Times bestseller and a Dayton Literary Peace Prize finalist. Originally from the United Kingdom, she now lives in California.