The Other Bennet Sister by Janice Hadlow: A Book Review 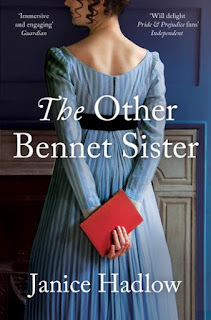 The Other Bennet Sister

Synopsis: Mary, the bookish ugly duckling of Pride and Prejudice’s five Bennet sisters, emerges from the shadows and transforms into a desired woman with choices of her own.

What if Mary Bennet’s life took a different path from that laid out for her in Pride and Prejudice? What if the frustrated intellectual of the Bennet family, the marginalized middle daughter, the plain girl who takes refuge in her books, eventually found the fulfillment enjoyed by her prettier, more confident sisters? This is the plot of Janice Hadlow's The Other Bennet Sister, a debut novel with exactly the affection and authority to satisfy Jane Austen fans.

Ultimately, Mary’s journey is like that taken by every Austen heroine. She learns that she can only expect joy when she has accepted who she really is. She must throw off the false expectations and wrong ideas that have combined to obscure her true nature and prevented her from what makes her happy. Only when she undergoes this evolution does she have a chance at finding fulfillment; only then does she have the clarity to recognize her partner when he presents himself―and only at that moment is she genuinely worthy of love.

Mary’s destiny diverges from that of her sisters. It does not involve broad acres or landed gentry. But it does include a man; and, as in all Austen novels, Mary must decide whether he is the truly the one for her. In The Other Bennet Sister, Mary is a fully rounded character―complex, conflicted, and often uncertain; but also vulnerable, supremely sympathetic, and ultimately the protagonist of an uncommonly satisfying debut novel.

My Review: Mary Bennet has been one of the most overlooked characters in Pride and Prejudice. In this new retelling of the beloved classic, Mary is at the center of the story. In a family of five daughters, Mary is the middle child and is often overlooked because of her plainness. Mary feels that she can never find a suitable man to marry her. Over time, Mary becomes a woman who eventually learns to take chances in love.

Pride and Prejudice is one of my favorite novels, and I always thought that there was more to Mary Bennet than just a comic relief character. In this novel, the reader gets to take a deeper look at Mary and learns that she is more than just a silly character. In this novel, Mary has low self-confidence because her family often comments on her plain looks. She is lonely and has no close siblings whom she can confide in. Her only friends are her books, and they bring her great comfort. Therefore, Mary is a relatable character because she feels that she cannot fit in with her family. Throughout the novel, Mary strives to find her place in the world. Thus, Mary is a very likable character, and I could not stop rooting for her to find her own happiness.

Overall, this novel is about family, identity, and self-acceptance. The novel is very well-written, and all the characters were very engaging and complex. I thought that Mary’s love story was well-developed and was the best part in the novel. I also thought that the author stayed true to the original version and felt like Jane Austen herself would have been proud of this sequel! Thus, this is one of the best Jane Austen adaptations that I have ever read! The Other Bennet Sister is a must read for any Austenite because you will fall in love with this charming story! I recommend this for fans of Unequal Affections, The Clergyman’s Wife, and Georgiana Darcy!