The Medea Complex by Rachel Florence Roberts: A Book Review 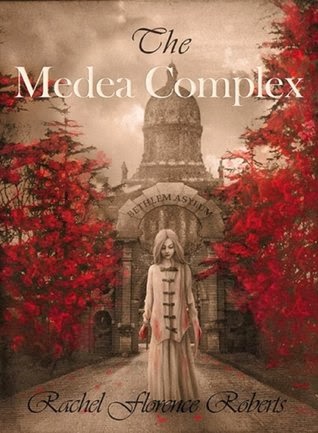 The Medea Complex
Author: Rachel Florence Roberts
Genre: Historical Fiction, Mystery, Suspense, Psychological Thriller
Publisher: CreateSpace
Release Date: 2013
Pages: 272
Source: This book was given to me by the author in exchange for an honest review.
Synopsis:  ****BASED ON A TRUE STORY***

1885. Anne Stanbury - Committed to a lunatic asylum, having been deemed insane and therefore unfit to stand trial for the crime of which she is indicted. But is all as it seems?

Edgar Stanbury - the grieving husband and father who is torn between helping his confined wife recover her sanity, and seeking revenge on the woman who ruined his life.

The Medea Complex tells the story of a misunderstood woman suffering from insanity in an era when mental illnesses' were all too often misdiagnosed and mistreated. A deep and riveting psychological thriller set within an historical context, packed full of twists and turns, The Medea Complex explores the nature of the human psyche: what possesses us, drives us, and how love, passion, and hope for the future can drive us to insanity.

My Review: This is a dark psychological thriller of  Anne Stanbury, a woman who finds herself in an insane asylum thinking that she is kidnapped and is being held for ransom because of her wealthy father. She has no memory of the crime that she has been accused of committing, for murdering her baby son that has outraged the Victorian society. She also does not remember her husband, who is hurt that the woman he loves, has killed their only son. The Medea Complex is a story told from the perspective Anne Stanbury, her husband, Lord Edgar Stanbury, her psychiatrist, Dr. George Savage, and Anne’s maid, Beatrix, to examine the motive of Anne’s crime, to question what actually drives people to insanity. It also questions: what is the true meaning of sanity?

Roberts has constructed an excellent cast of characters. All of them are realistic and complex, which is what makes them human. Each of the characters have their flaws. However, the person that the audience can trust the most is Dr. Savage. Dr. Savage represents the reader, because he is the investigator of the story. He analyzes and questions Anne’s mind and actions, and is always on a continuous hunt for the truth. Edgar Stanbury is relatable because we can understand the motive of why he is conflicted. He is torn between the love he has for his wife, but he also wants vengeance for the loss of  his beloved son. Beatrix is Anne’s only friend, but she too has dark secrets of her own. The most complex character is the main character, Anne. She is the most mysterious of them all. The reader is eager to see who she truly is.

Overall, the story was fast-paced and suspenseful. It is full of twists and turns that will keep the reader on the edge their seat and eager to keep reading till the end. The settings is very descriptive and well built.The insane asylum is dark and eerily creepy, and the manor that the Stanburys live shows us that not is all as it seems. The main reason I give this review 4 instead of 5 stars, is that there were some scenes I felt that could be left out, for example there was a drawn out bathroom humor scene where the Inspectors talked endlessly on about their bladder control. I also felt that there were still a few loose ends, but I hope that the author can write a sequel to this book so she can tie them up. But aside from this, it was a well-written story. I recommend this novel to anyone interested in Victorian psychology, and fans of Stephen King, John Grisham, Primal Fear, and anyone interested in dark stories or psychological thrillers.