The Blue Butterfly: A Novel of Marion Davies by Leslie Johansen Nack 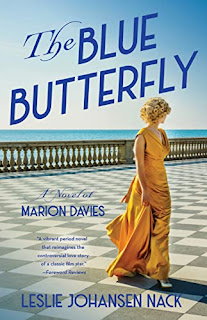 Source: This book was given to me by the publisher in exchange for an honest review.

Synopsis: New York 1915, Marion Davies is a shy eighteen-year-old beauty dancing on the Broadway stage when she meets William Randolph Hearst and finds herself captivated by his riches, passion and desire to make her a movie star. Following a whirlwind courtship, she learns through trial and error to live as Hearst’s mistress when a divorce from his wife proves impossible. A baby girl is born in secret in 1919 and they agree to never acknowledge her publicly as their own. In a burgeoning Hollywood scene, she works hard making movies while living a lavish partying life that includes a secret love affair with Charlie Chaplin. In late 1937, at the height of the depression, Hearst wrestles with his debtors and failing health, when Marion loans him $1M when nobody else will. Together, they must confront the movie that threatens to invalidate all of Marion’s successes in the movie industry: Citizen Kane.

I have heard of the silent film star, Marion Davies, but I did not know much about her life. Thus, I was eager to read The Blue Butterfly that focuses on her romance with William Randolph Hearst. In The Blue Butterfly, I found Marion Davies to be a very unlikable person. This novel showed Marion to be very narcissistic. She seemed to be more interested in William Randolph Hearst’s money than the person himself. She loves the high life and does not care to hurt others as long as she gets what she wants in the end. She also committed many foolish actions. Thus, Marion seemed to be a very cold person that I could not sympathize her actions or relate to her. I felt indifferent to her internal struggles.

Overall, this novel is about passion, ambition, and change. The characters in the story were very unlikable and selfish. Some of the scenes in this novel were also repetitive. However, there were a few good points about the novel. I did like how Hollywood changed over a period of time. I did like the historical details in the novel, and it is clear the author did her research. I believe fans of Old Hollywood may want to give this novel a try. I recommend The Blue Butterfly for fans of Platinum Doll, Marlene, and Beautiful Invention!

This is the official book trailer of The Blue Butterfly: