Clytemnestra: The Mother's Blade by Victorial Grossack and Alice Underwood: A Book Review 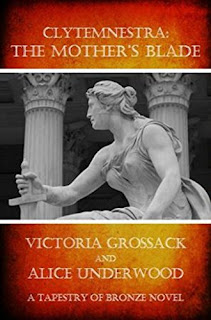 Clytemnestra: The Mother's Blade
Author: Victoria Grossack, Alice Underwood
Genre: Historical Fiction, Fantasy
Publisher: CreateSpace
Release Date: 2017
Pages: 351
Source: Kindle Unlimited
Synopsis: Raised a princess in Sparta, Clytemnestra understands that leaders make many sacrifices. But she is shocked when she is forced to marry the murderer of her husband and firstborn child.
Though she wields great power as High Queen of Mycenae, and adores her younger children, being Agamemnon’s wife is difficult – and becomes harder after her sister Helen’s departure for Troy ignites the greatest war the world has ever seen.
Clytemnestra remains determined to protect her children and her city. But then a long absent prince – her husband’s hated rival – begins to claim her heart…
My Review: Clytemnestra has a tarnished reputation in Greek mythology. She is known to be an unfaithful wife and a murderer. However, this novel gives us a glimpse into Clytemnestra’s psyche and the motives for her atrocious actions. Clytemnestra shows a strong queen who is a loving mother. She puts her children before herself.
At a young age, Clytemnestra is sent to marry King Tantalus, who is many years her senior. She gives birth to a son. Six months later, King Agamemnon attacks her kingdom and kills both her husband and son. Because she is a prisoner, she is forced to marry him against her will. While she hates the fact that her son’s murderer is her husband, she tries to make the best of her situation. She rules Mycenae and has three girls and one son. When Agamemnon sacrifices their eldest daughter to start his longed-for war against Troy, Clytemnestra vows for revenge.
Clytemnestra is a very tragic figure. I felt sorry for her that she had to marry the murderer of her son and brother. She tries to adjust to her new life with Agamemnon. Yet, when he kills her daughter, it is the last straw for her. She knows she can no longer be content with Agamemnon. She would never forgive him for killing her two children. Therefore, she decides to murder him. I can see why she falls for Agamemnon’s cousin, Aegisthus. Aegisthus understands Clytemnestra and her actions. He loves her for who she is. He is portrayed as a man that does not desire power but as a step-father figure that loves her children. Therefore, it was heartening that she was able to find love again.
Overall, this novel is about love, loss, and revenge. Clytemnestra is a mother who is willing to do anything for her children. The characters seem very realistic. Agamemnon is portrayed as a ruthless man who is greedy for gold and power. Helen is portrayed as an airhead. Menelaus is portrayed as a lovesick fool. The authors did an excellent job in making Bronze Age Greece come alive. I could almost imagine that the figures in Greek myths were once real. The only thing I did not like about this book was that there were some disturbing scenes that were hard to read. Nevertheless, the novel makes Clytemnestra a complex woman. Clytemnestra is given a different interpretation than how she is portrayed in the Greek myths. I recommend this novel for those who love Circe, The Firebrand, and Helen of Troy.
Rating: 4 out of 5 stars