The Sun Down Motel by Simone St. James: A Book Review 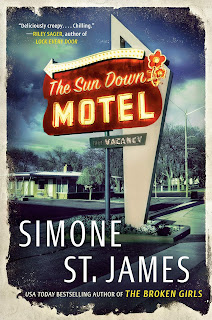 The Sun Down Motel
Author: Simone St. James
Genre: Historical Fiction, Mystery, Paranormal
Publisher: Berkely
Release Date: 2020
Pages: 336
Source: Netgalley/Publisher in exchange for an honest review
Synopsis Something hasn’t been right at the roadside Sun Down Motel for a very long time, and Carly Kirk is about to find out why in this chilling new novel from the New York Times bestselling and award-winning author of The Broken Girls.
Upstate New York, 1982. Viv Delaney wants to move to New York City, and to help pay for it she takes a job as the night clerk at the Sun Down Motel in Fell, New York. But something isnʼt right at the motel, something haunting and scary.
Upstate New York, 2017. Carly Kirk has never been able to let go of the story of her aunt Viv, who mysteriously disappeared from the Sun Down before she was born. She decides to move to Fell and visit the motel, where she quickly learns that nothing has changed since 1982. And she soon finds herself ensnared in the same mysteries that claimed her aunt.
My Review: One night in 1982, Viv Delany goes in to work her usual night shift at a haunted motel. However, she disappeared and was never found. In 2017, Carly Kirk comes to the Sun Down Motel to find her missing aunt. Could Carly find the truth about what happened to her mysterious aunt? Her investigation leads her to discover the motel’s secrets and the ghosts that haunt the place.
Viv was the most fascinating character in this story. I liked reading her parts more than Carly. Viv is very daring. She is also very clever and observant. I love her sleuthing skills, and it was fun following her to be on a hunt for a killer. Viv is characterized as an introvert. She does not have many close interactions with other people. However, I found her to be a strong heroine.
Carly was a bland character. She seemed to be more interested in romance than finding her aunt. I found her to be judgmental and unforgiving. This made it harder to like her. While Viv was a strong character, Carly was weak. Many times she was a damsel in distress. She also made foolish decisions. Therefore, Carly was the opposite of Viv.
Overall, this novel is full of paranormal elements with a predictable mystery. The setting of the haunted motel had potential. However, it was not developed well. The ghosts did not have much of a personality. They were just there. This made the supernatural element unnecessary. The ending was disappointing and felt anti-climatic. Therefore, I recommend this book if you love paranormal romances. However, I recommend readers to read Mrs. St. James’s earlier works instead because those are her best novels that she has written so far.
Rating 2½ out of 5 stars