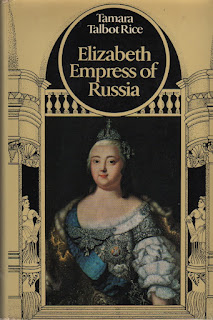 Synopsis: Born in 1709, the illegitimate daughter of Peter the Great and a woman of Livonian yeoman stock, Elizabeth was the only on of the Tsar's many children to survive to maturity. She lived through the reigns of four monarchs after her father's death, before seizing the throne in 1741 at the age of thirty-two. Faced with governing a country made unstable by frequent changes of ruler and caught up in web of international politics, she evolved a policy that set Russia on the road to becoming a major Western power. Elizabeth, beautiful, vivacious and immensely popular, with some of her father's genius for government, was often irresolute and fickle. She was a paradoxical woman - generous and spontaneous yet capable of inflicting the most savage of punishments, vain and hedonistic yet with a social conscience ahead of her time. Tamara Talbot Rice gives a vivid picture of court life, riddled with intrigue and corruption; of social conditions in Elizabeth's still feudal Russia; of the great flowering of painting, architecture, and other arts under her patronage of foreign artists; and of Elizabeth's struggle for international power, culminating in the Seven Years' War against Prussia. The author has drawn heavily on contemporary documents - ambassadors' letters, the private memoirs of the Empress Catherine II, and state documents - to give a highly sympathetic portrait of Elizabeth and fresh insight into her actions and the events of her reign. The period of Russian history between the death of Peter the Great, in 1725, and the accession of Catherine the Great, in 1762, has long been unjustly neglected: the last study of the reign of the Empress Elizabeth was published in 1902. This new biography therefore fills a most important gap and investigates the policies and efforts of Elizabeth - the last true Romanov to reign over Russia - that were the foundations upon which her better-documented successor Catherine built her reputation.

My Review: Empress Elizabeth Petrovna has often been overlooked in favor of her more infamous successor Catherine the Great. However, in this rare biography of the empress in English, the reader gets a better look at Elizabeth and her accomplishments. With Empress Elizabeth on the throne, Russia began to blossom into a golden age. This biography shows that Elizabeth was just a great ruler as her successor.

Elizabeth’s rise to power is truly astonishing. She was born an illegitimate daughter of Peter the Great and his mistress. When Peter the Great finally married his mistress and made her his tsarina, Elizabeth was made legitimate. With her connection to the throne, Elizabeth became a spectator and watched the reigns of four rulers. It was not until she was thirty-two that she reluctantly seized power and ascended the throne. During her reign, she chose capable men to help her run the government. She was also a patron of the arts and architecture that let literary arts foster. Through her guidance, she helped open the doors to make Russia a major Western power.