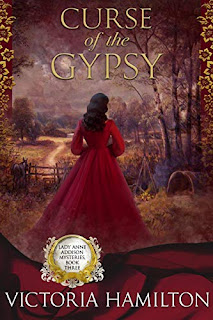 Publisher: Beyond the Page

Finally home in Kent after her recent adventures in Yorkshire and Cornwall, Lady Anne Addison is shocked to spy her erstwhile suitor, the Marquess of Darkefell, skulking around the gypsy camps near her property. Outraged that he has followed her there, she writes a scathing letter to him and his family, which brings Darkefell—and his denials that it was he—to Kent.

Despite Darkefell’s arrival, Anne is preoccupied with the troubles that plague her family and loved ones. Is it the old gypsy woman’s curse that is making her friends ill, or something far more sinister? One by one, Anne and Darkefell must unravel the troubling mysteries, and then travel back to Yorkshire, where their love story began, to finally solve the murder that threatens the very heart of his family . . .

My Review: When Lady Anne Addison returns to her home in Kent, she finds her suitor is hanging out with the gypsies nearby. She sends an angry letter to his family expressing her displeasure, only for her suitor to deny  he was anywhere near the gypsies’ camp. She also learns that there is a gyspy that has cursed her friends. Are her friends’ illnesses the result of the curse or is there something more sinister involved?

Lady Anne Addison was a very likable heroine in the first book of the series. However, in this novel, I found her to be insufferable. I did not like how she treated the Marquess of Darkefell. Her attempts at trying to be an independent woman seemed completely silly. She quickly became an insipid and selfish character. Thus, her actions largely made a short read a slog for me, and I kept putting the story down wishing to not have the trouble to put up with the vapid heroine.

Overall, the third installment tied up loose ends from the first novel. This novel had a simple plot with not as much mystery as the previous novels. The scenes were very repetitive, especially the interactions between Lady Anne Addison and the Marquess of Darkefell that made the novel seem very drawn out. I was quite surprised that there is a fourth novel in this series. I was surprised because I thought Curse of the Gyspy tied everything together neatly, so that it seems more fitting to be a trilogy. While I was left wanting more from this novel, it still left me slightly more curious to read the fourth book. Still, the series as a whole is an excellent addition to those that love a cozy mystery. I recommend this for fans of Anna Lee Huber, Elizabeth Bailey, and Andrea Penrose.