The Empress in the Pepper Chamber: Zhao Feiyan in History and Fiction by Olivia Milburn: A Book Review 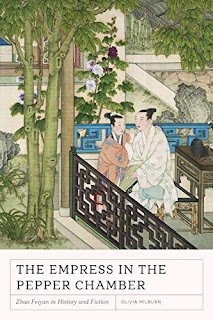 The Empress in the Pepper Chamber: Zhao Feiyan in History and Fiction
Author: Olivia Milburn
Genre: Nonfiction, History, Biography
Publisher: University of Washington Press
Release Date: May 24, 2021
Pages: 233
Source: Personal Collection
Synopsis: Zhao Feiyan (45–1 BCE), the second empress appointed by Emperor Cheng of the Han dynasty (207 BCE–220 CE), was born in slavery and trained in the performing arts, a background that made her appointment as empress highly controversial. Subsequent persecution by her political enemies eventually led to her being forced to commit suicide. After her death, her reputation was marred by accusations of vicious scheming, murder of other consorts and their offspring, and relentless promiscuity, punctuated by bouts of extravagant shopping.

This first book-length study of Zhao Feiyan and her literary legacy includes a complete translation of The Scandalous Tale of Zhao Feiyan (Zhao Feiyan waizhuan), a Tang dynasty (618–907 CE) erotic novella that describes in great detail the decadent lifestyle enjoyed by imperial favorites in the harem of Emperor Cheng. This landmark text was crucial for establishing writings about palace women as the accepted forum for discussing sexual matters, including fetishism, obsession, jealousy, incompatibility in marriage, and so on. Using historical documentation, Olivia Milburn reconstructs the evolution of Zhao Feiyan's story and illuminates the broader context of palace life for women and the novella's social influence.

My Review: Zhao Feiyan has been known as one of China’s most lurid empresses. She has appeared in many lewd Chinese literature books. It was said that her thirst for sensual pleasures could never be quenched. In this first full length study of the notorious empress published in the English language, Ms. Milburn attempts to separate fact and fiction about Zhao Feiyan. This book shows us that the empress’s first biography was written by the family of her bitter rival that she had defeated when fighting for the emperor's attention. Yet, chroniclers continued to defile her reputation. Ms. Milburn stated that the reason for her having the worst reputation of all other Chinese empresses is because she did not give the emperor a son. Because she remained childless, chroniclers felt that she deserved her reputation.
When reading about Chinese empresses, it is hard to separate truth from legend. They were either good or bad. There was no in-between. The empresses either had virtue or none. Thus, all bad empresses usually had the same wicked actions. They would spend their time eliminating  their rivals and monopolizing the emperor’s love. Zhao Feiyan started out from a poor family. She was a professional dancer. One day, she happened to dance for Emperor Cheng of Han. Emperor Cheng was quite taken with her and made her his concubine. She was eventually promoted to empress much to the disapproval of the emperor’s mother, Empress Dowager Wang Zhengjun because of her low birth.
As empress, Zhao Feiyan indulged in a lavish lifestyle. Her indulgence for luxury has often been criticized by historians. Yet, Ms. Milburn states that it was the role of an empress to live opulently. The empress was also said to have taken numerous male lovers. However, Ms. Milburn claims that it is unlikely because she was closely watched in the palace. Thus, Zhao Feiyan was doing her duty as an empress and was faithful to the emperor. She most likely does not seem like the character she is portrayed to be in both popular fiction and media.
Overall, this was an in-depth study of how Zhao Feiyan gained her notorious reputation. Empress Zhao Feiyan’s greatest crime was that she did not produce a son by Emperor Cheng. If she had, her reputation may not be what it is today. Despite its convincing rehabilitation of Empress Zhao Feiyan, this book was not without its flaws. I thought there were some dry parts in the book and it tended to repeat itself. Still, I found this study to be very eye-opening of an empress whose story I thought I had known. It made me question which parts about the empress’s life were true and which was false. One can only imagine what her true portrayal may have been like if her first biography was not written by her enemies. The Empress in the Pepper Chamber is a must read for those who are interested in learning about ancient Chinese culture. I recommend this book for fans of Dragon Lady: The Life and Legend of the Last Empress of China, Wu Zhao: China’s Only Female Emperor, and Empress Dowager Cixi.
Rating: 4 out of 5 stars