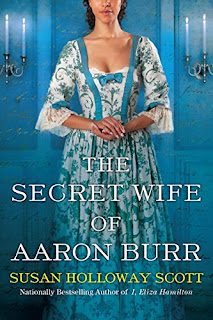 The Secret Wife of Aaron Burr: A Riveting Untold Story of the American Revolution
Author: Susan Holloway Scott
Genre: Historical Fiction
Publisher: Kensington
Release Date: 2019
Pages: 512
Source: Netgalley/Publisher in exchange for an honest review.
Synopsis: Inspired by a woman and events forgotten by history, bestselling author Susan Holloway Scott weaves together carefully researched fact and fiction to tell the story of Mary Emmons, and the place she held in the life—and the heart—of the notorious Aaron Burr.

He was a hero of the Revolution, a brilliant politician, lawyer, and very nearly president; a skillful survivor in a raw new country filled with constantly shifting loyalties. Today Aaron Burr is remembered more for the fatal duel that killed rival Alexander Hamilton. But long before that single shot destroyed Burr’s political career, there were other dark whispers about him: that he was untrustworthy, a libertine, a man unafraid of claiming whatever he believed should be his.

Sold into slavery as a child in India, Mary Emmons was brought to an America torn by war. Toughened by the experiences of her young life, Mary is intelligent, resourceful, and strong. She quickly gains the trust of her new mistress, Theodosia Prevost, and becomes indispensable in a complicated household filled with intrigue—especially when the now-widowed Theodosia marries Colonel Aaron Burr. As Theodosia sickens with the fatal disease that will finally kill her, Mary and Burr are drawn together into a private world of power and passion, and a secret, tangled union that would have shocked the nation . . .
My Review: Everyone has heard of Aaron Burr, who was infamous for killing Alexander Hamilton. Yet, hardly anyone has ever heard of his secret wife, Mary Emmons. Even though she is not mentioned in biographies of Aaron Burr, her legacy remains with her children, especially John Pierre Burr, the famous abolitionist. In this novel, Mrs. Scott reimagines what Mary Emmons’ life may have been like, and why Aaron Burr married her.
Mary Emmons was brought up in a poor household in Pondicherry, India. One day, her uncle sells her into slavery to the Beauharnais family. Through a series of events, she eventually makes her way to America where she is a slave to Theodosia, the wife of a British officer. Theodosia later marries Aaron Burr after the death of her husband. Through Mary Emmons' eyes we see the courtship and eventual marriage between Theodosia and Aaron Burr. We also see Aaron Burr’s growing attraction towards Mary Emmons.
I found Mary Emmons’ story to be compelling, and I could hardly stop reading because I kept hoping that things would get better for her. Mary Emmons’ life was full of tragedy. As a slave, her life was not her own. She was regarded and treated like property. Despite her circumstances, Mary Emmons was a smart and courageous woman. She never gave up fighting for her freedom. She was a very admirable character. I empathized with her and rooted for her to achieve her goal.
All of the characters were complex and realistic. Theodosia was a hard character to like. Even though she was intellectual and had a fondness for reading, I did not like how she treated Mary and prevented her from marrying her love, Lucas Emmons. The most fascinating character was Aaron Burr. He was really complex. He was very hot-headed and impulsive. He did many horrible things. Yet, in Mary Emmons’ eyes, he was shown to be a tragic figure who was highly instrumental in his own downfall. Thus, I still could not decide if I found him a sympathetic character or if I dislike him immensely.
Overall, this novel does justice in bringing a forgotten woman to life. The novel was meticulously well-written with vivid descriptions. It felt as if I was there during the early days of the founding of America walking alongside Mary Emmons. The Secret Wife of Aaron Burr is a page-turner, for it kept me reading until dawn trying to finish the novel. Even after I finished the novel, Mary Emmons’ story lingered with me. Therefore, this book will definitely be a re-read. The Secret Wife of Aaron Burr is a tribute to Mary Emmons. I hope that since this novel has been released there will be more scholarship on this obscure woman. The Secret Wife of Aaron Burr is a must read for fans of America's First Daughter, Sally Hemmings, and The President’s Daughter!
Rating: 5 out of 5 stars