Kaiulani of Hawaii: And The Fall of Her Kingdom by Peter W. Noonan: A Book Review 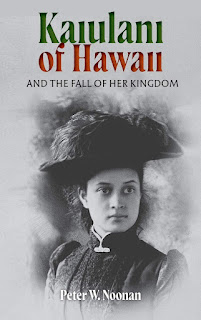 Kaiulani of Hawaii: And The Fall of Her Kingdom

Synopsis: In the nineteenth century Hawaii achieved a widely-recognized status as an independent state but it was unable to retain its independence. The loss of Hawaii's independence followed changes in US foreign policy, and a local coup d'état that was supported by the US Navy and Marines, which set Hawaii on a course towards inclusion in a new American Pacific Empire. But the last Crown Princess of the Kingdom, seventeen year old Princess Victoria Kaiulani, who was a student in England when the crisis broke struggled against the annexation of her country. She travelled to America to try and influence American public opinion, and she met with the President of the United States to bear witness to the tragedy that had befallen Hawaii. Her poignant pleas for her country touched the conscience of many, and her actions helped to foil Hawaii's immediate annexation, giving her country a brief reprieve from the loss of its national sovereignty. Later, after Hawaii was absorbed by the United States, she strove to ensure that indigenous Hawaiians would be able secure their political rights as US citizens, before she suffered an early death at the age of twenty-three.

Princess Kaiulani was the daughter of Archibald Cleghorn and Miriam Likelike, the sister of King David Kalakaua. Her mother died when she was at a young age and she was raised by her father. When she was thirteen, she went to school in England. She remained in England for eight years. During her years abroad, Kaiulani became Crown Princess when her aunt Liliuokalani ascended the throne in 1891.

When Princess Kaiulani returned to Hawaii, she realized that her country’s independence would soon be lost. When the United States finally annexed it, Princess Kaiulani was deeply heartbroken over the loss of Hawaii’s freedom. She wondered what her role would be in the aftermath of Hawaii’s annexation. She died shortly afterwards, and was given a royal funeral.

Overall, this biography showed the importance of Princess Kaiulani’s place in both Hawaiian and United States history. While the book is very detailed, it was very dry, and it took me over half a year to finish it. This made reading very tedious. The book was heavily disjointed, which kept going back and forth from different timelines that made it confusing to the reader. The author kept giving details that seemed irrelevant to Princess Kaiulani’s life. The author was very biased. He heavily criticized Liliuokalani as a bad ruler and that it was her poor decisions that caused the downfall of a kingdom. The author also believed that if Princess Kaiulani was queen Hawaii would never have been annexed. Therefore this biography would have been an excellent read if many parts of the book were cut out. Still, after reading this biography on Princess Kaiulani, it makes one wonder what she might have been like as queen.