The Rose Code by Kate Quinn: A Book Review 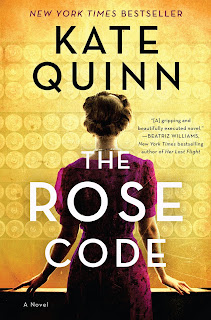 Three very different women are recruited to the mysterious Bletchley Park, where the best minds in Britain train to break German military codes.

Vivacious debutante Osla has the dashing Prince Philip of Greece sending her roses – but she burns to prove herself as more than a society girl, working to translate decoded enemy secrets. Self-made Mab masters the legendary codebreaking machines as she conceals old wounds and the poverty of her East-End London upbringing. And shy local girl Beth is the outsider who trains as one of the Park’s few female cryptanalysts.

Seven years after they first meet, on the eve of the royal wedding between Princess Elizabeth and Prince Philip, disaster threatens. Osla, Mab and Beth are estranged, their friendship torn apart by secrets and betrayal. Yet now they must race against the clock to crack one final code together, before it’s too late, for them and for their country.

The three women, Osla, Mab, and Beth are fictional. However, it seems that Osla is inspired by a real historical figure. The three characters are vastly different, Osla is a rich socialite who happened to date Prince Phillip, the Queen’s future husband. Mab is a poor woman who strives to rise out of poverty. Beth is a woman trying to survive domestic abuse from her mother. Despite these three backgrounds, I found the characters to be a bit bland. They were very stereotypical. The character I was most interested in was Beth because she had a very tragic story. Thus, I thought they could use more development.

Overall, this was a story about friendship, choices, and forgiveness. The characters were very stereotypical. The romance which was one of the main focuses in the book was weak. I really did not like Prince Phillips’s relationship with Osla, and I think Prince Phillip made the best decision in ending up with the queen. Osla and Prince Phillip just did not connect. The mystery aspect was very little focused upon. I was disappointed by this because it was the best part in the book. I was also not impressed with the writing style. It was written in a passive voice. This novel also seemed to be very drawn out. Despite its flaws, The Rose Code reads like a soap opera because there is danger, betrayal, and scandal. I recommend this novel for fans of Code Name Verity, Code Name Helene, and The Codebreakers! The Rose Code is a light, fluffy read that is perfect for the beach!

This is the official book trailer for The Rose Code: