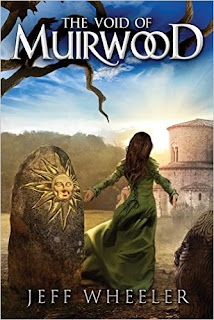 The Void of Muirwood (Covenant of Muirwood #3)
Author: Jeff Wheeler
Genre: YA, Fantasy
Publisher: 47North
Release Date: 2015
Pages: 432
Source: Netgalley/Publisher in exchange for an honest review.
Synopsis: When banished Princess Maia is captured by her father and threatened with execution, it appears that all is lost…until the people rise in rebellion against their king. Suddenly, the cast-aside royal finds herself crowned the first Queen of Comoros. But enemies appear on all sides as her father’s conniving supporters assemble a new army against the fledgling ruler. While Maia struggles to keep the peace within her own walls, she rushes to form historical alliances with her neighboring kingdoms against an impending invasion of the ruthless Naestors—led by the cruel Corriveaux—who will destroy anyone Maia loves in order to ruin her kingdom and prevent the mastons from regaining power.

Realizing that Muirwood Abbey is once again her only hope for survival, Maia gathers her people there for protection. When she discovers an adversary greater than she’s ever known, she must use all the magic, strength, and wisdom gained from her life’s trials to prevent the Void that would bring destruction to herself, her true love, and the entire kingdom.

My Review: The Void of Muirwood is the thrilling conclusion to The Covenant of Muirwood trilogy. Maia’s evil father has died, leaving Maia as the only heir of Comoros. Maia must face the task of ruling her kingdom. She must appoint worthy people to serve her so she can bring peace to the kingdom. However, there are people in her country who do not see her as the true ruler and begin to rebel. Yet, while the country begins fighting each other, they face a bigger threat that will intends to destroy them all. Can Maia save her kingdom and restore peace and prosperity to her lands?

Maia has never been trained to rule as queen. Yet, she makes wise decisions. She appoints people whom she trusts and who have the interests of the kingdom to serve her.  As queen, Maia is thrust into obstacles and hard decisions that she must make alone. She must rely on her instincts and let them show her the way. She must also learn to forgive her enemies and bestow them mercy. She strives to rule with truth and goodness. However, she is not perfect. She does not trust people easily, she is prone to jealousy, and sometimes has a thirst for vengeance. Yet, she is relatable because she wants to do what is right.

Overall, this book is about friendship, love, trust, mercy, choices, and forgiveness. The message of the story is to forgive those who have done you wrong. The story was fast-paced and full of adventure. The characters were likeable and the villains were complex and interesting. This book is a fantasy, however it is inspired by the life of an actual historical figure, Mary Tudor, the first female ruler of England. Thus, this book is full of court intrigue, suspense, danger, and action. I found that this book was a nice conclusion to the series. I recommend this book to anyone interested in Mary Tudor, warring kingdoms, and high epic fantasy.