July 29, 2016
Today's guest writer is Cheryl Honigford. She is the debut author of The Darkness Knows. It is the first in a mystery series set in Chicago and features Vivian Witchell and Charlie Haverman.  In this guest post she discusses writing about a woman sleuth. I have a lifelong passion for female sleuths, and I will also review The Darkness Knows soon! I hope this guest post will give you some insight into her writing and her novel. Thank you, Mrs. Honigford! 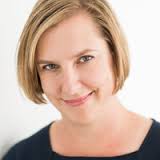 I didn’t set out to write a woman sleuth. It’s just that my main character, radio actress Vivian Witchell, discovers the body of a murdered co-star in the station’s lounge and becomes a sleuth by happenstance. My debut novel, THE DARKNESS KNOWS, is a historical mystery set in a radio station in 1938 Chicago. Women sleuths in historical mysteries are generally of the amateur and accidental variety - meaning they are not detectives by profession, but they stumble into murder and mayhem and have a personal stake in solving it. Like Vivian.

Vivian is career-minded and independent – not common qualities found in even the most spirited of young women of 1930s Middle America. Sure, women went to college then, some even had jobs outside the home, but a career was not something most aspired to have. Society dictated that most women get married and have children. Period. Women usually only held jobs temporarily until they found a husband to “take care” of them.

So Vivian is already something of an outlier even before she discovers the murder. She is in her mid-twenties and unmarried. She doesn’t need to work. She does, however, want to work (gasp!). Vivian is headstrong and independent, something that modern readers can relate to. But I knew that to be historically accurate I also had to balance those character traits with the gender attitudes of the time period. After all, in the late 1930s the women’s lib movement is still about thirty years in the future. So Vivian needs to be aware of, and at least partially conform to, the 1930s-era ideas about a woman’s place in society: a woman’s never going to run a company much less run for president of The United States (ahem). The professional fields open to women at the time are narrow and options for advancement almost non-existent. The average woman can reasonably hope to become a teacher, nurse, or secretary – which is Vivian’s profession before she becomes an actress.

Society’s restrictions are stifling to a bright young woman, as you can imagine, so when she gets the chance to solve the murder she jumps at it. After all, this murder has threatened her burgeoning career in radio and her sense of self as a result. What can she do but find the killer and put a stop to all of it, so her star can continue to rise? But once she starts sleuthing she finds that she actually likes it – the darkness, the danger, the challenge.

Vivian, like most amateur historical women sleuths, finds a way to use her wits in a world that wants to confine her to a pretty little box. I think a lot of historical women sleuths are like this – desperately searching for an outlet for the workings of their agile minds. Then they stumble upon sleuthing quite by accident and find solving a good puzzle is what they crave. I’m not going to tell you whether Vivian’s successful in her investigation - you’ll have to read the book for that. But I will tell you that she’s more than up to the challenge. 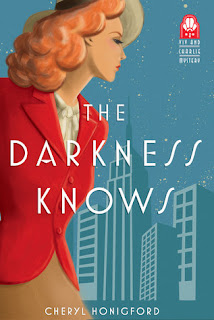 The Darkness Knows by Cheryl Honigford

Chicago, 1938. Late one night before the ten o'clock show, the body of a prominent radio actress is found in the station's lounge. All the evidence points to murder—and one young, up-and-coming radio actress, Vivian Witchell, as the next victim. But Vivian isn't the type to leave her fate in the hands of others—she's used to stealing the show. Alongside charming private detective Charlie Haverman, Vivian is thrust into a world of clues and motives, suspects and secrets. And with so much on the line, Vivian finds her detective work doesn't end when the on-air light goes out...

The gripping first novel in a new series from debut author Cheryl Honigford, The Darkness Knows is a thrilling mystery that evokes the drama and scandal of radio stardom in prewar Chicago.

Born and raised in Ohio, Cheryl Honigford has been writing stories since she could read (and telling stories even before that). She received her BA in Journalism, with a minor in English, from The Ohio State University.

The Darkness Knows began life as a Nanowrimo novel, inspired by Cheryl's love of mysteries, Chicago, and old-time radio (and all things 30s). It was a quarter-finalist in the Amazon Breakthrough Novel Contest and the overall winner of the Daphne du Maurier Award for Excellence in Mystery/Suspense (Unpublished Category).

Cheryl lives with her family in the suburbs of Chicago where she enjoys what her husband likes to call "the interests of an 80-year-old woman" (knitting, canning, cozy mysteries, and Fred and Ginger movies). The Darkness Knows is the first book in the Viv and Charlie Mystery series. Visit her website.

Also check out my review of Cheryl Honigford novel: