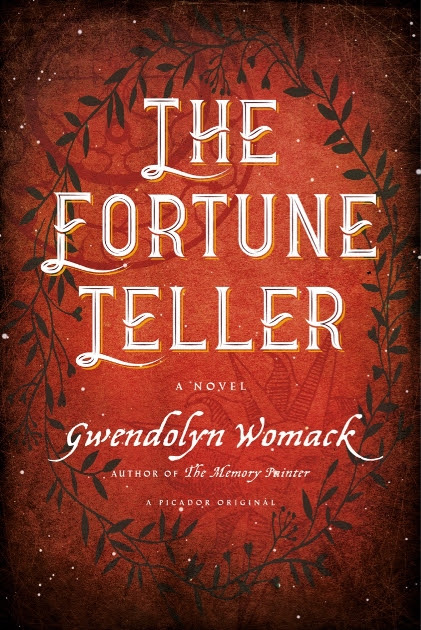 The Fortune Teller by Gwendolyn Womack

FROM THE AWARD-WINNING AUTHOR OF THE MEMORY PAINTER COMES A SWEEPING AND SUSPENSEFUL TALE OF ROMANCE, FATE, AND FORTUNE.

Semele Cavnow appraises antiquities for an exclusive Manhattan auction house, deciphering ancient texts—and when she discovers a manuscript written in the time of Cleopatra, she knows it will be the find of her career. Its author tells the story of a priceless tarot deck, now lost to history, but as Semele delves further, she realizes the manuscript is more than it seems. Both a memoir and a prophecy, it appears to be the work of a powerful seer, describing devastating wars and natural disasters in detail thousands of years before they occurred.

The more she reads, the more the manuscript begins to affect Semele’s life. But what happened to the tarot deck? As the mystery of her connection to its story deepens, Semele can’t shake the feeling that she’s being followed. Only one person can help her make sense of it all: her client, Theo Bossard. Yet Theo is arrogant and elusive, concealing secrets of his own, and there’s more to Semele’s desire to speak with him than she would like to admit. Can Semele even trust him?

The auction date is swiftly approaching, and someone wants to interfere—someone who knows the cards exist, and that the Bossard manuscript is tied to her. Semele realizes it’s up to her to stop them: the manuscript holds the key to a two-thousand-year-old secret, a secret someone will do anything to possess.

Praise for The Fortune Teller

“Beginning as a clever mystery based on an ancient manuscript and evolving into a family epic spanning centuries, an international thriller, and a destined romance, The Fortune Teller has something for everyone. Offer it to fans of A.S. Byatt’s Possession and Lauren Willig’s Pink Carnation series.”―Booklist

“Womack alternates back and forth between a whirlwind history that spans thousands of years and the suspense of Semele’s search…Entertaining.”—Kirkus Reviews

“The Fortune Teller is a gripping, twisting tale that spans thousands of years, thousands of miles, and perhaps even crosses over to the ‘other side.’ A fascinating read that is that unlikely combination of unputdownable and thought-provoking.”—B.A. Shapiro, bestselling author of The Art Forger and The Muralist

“There aren’t enough words to adequately describe how much I love The Fortune Teller. It is a gripping and masterfully woven combination of history, mystery, fate, adventure, and family ties: a true page-turner that enthralls from the first sentence with unique characters, fascinating settings, and intriguing artifacts. Womack brilliantly illuminates how there is more at play in the world than logic can explain.”—Kelli Estes, USA Today bestselling author of The Girl Who Wrote in Silk

“The Fortune Teller takes you on an international thrill ride across centuries—with fascinating research and memorable characters—proving once again that Gwendolyn Womack is a magician, keeping readers turning pages with wonder and awe.”—M.J. Rose, New York Times bestselling author

“What a mesmerizing journey. The suspense increases steadily throughout the novel, as Semele realizes her identity is caught up in the mysterious manuscript and that the truth of her own abilities is a secret people will kill for. Readers who enjoy the novels of Katherine Neville, Kate Mosse and Diana Gabaldon will savor this treat.”—Nancy Bilyeau, author of The Crown

Originally from Houston, Texas, Gwendolyn Womack studied theater at the University of Alaska, Fairbanks. She holds an MFA in Directing Theatre, Video, and Cinema from California Institute of the Arts. Her first novel, The Memory Painter, was an RWA PRISM award winner in the Time Travel/Steampunk category and a finalist for Best First Novel. She now resides in Los Angeles with her husband and her son.

Wednesday, June 7
Just One More Chapter
A Dream within a Dream

Wednesday, June 28
A Fold in the Spine

Thursday, June 29
The Book Junkie Reads
So Many Books, So Little Time

Friday, June 30
Passages to the Past