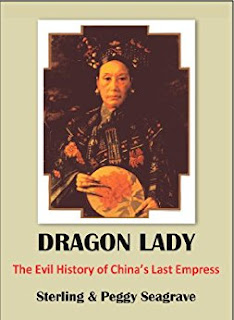 Dragon Lady: The Evil History of China's Last Empress
Author: Sterling Seagrave and Peggy Seagrave
Genre: Nonfiction. History, Biography
Publisher: Bowstring Books
Release Date: 2010
Pages: 624
Source: Kindle Unlimited
Synopsis: The author of The Soong Dynasty gives us our most vivid and reliable biography yet of the Dowager Empress Tzu Hsi, remembered through the exaggeration and falsehood of legend as the ruthless Manchu concubine who seduced and murdered her way to the Chinese throne in 1861.

My Review: Empress Dowager Cixi was one of the last empresses of the imperial dynasty. She is attributed to the fall of the dynasty. She is often portrayed as a cunning, manipulative, and power-hungry figure. However, in this biography of the Empress Dowager, the authors claim that the rumors surrounding Cixi are false. The people who started the rumors were foreigners who blackened her name for personal reasons. Thus, the authors conclude that Empress Dowager Cixi was more of a figurehead like Queen Victoria rather than a woman who held absolute power like Catherine the Great.

Empress Dowager Cixi was regent for her son and nephew. She did not have any knowledge about China outside of the palace. She was also illiterate and did not have any knowledge in politics. The authors claim that during Cixi’s reign as regent, she was often powerless. The ones that held the true power were the ministers, in particular Prince Kung and later Viceroy Li. Many of the scandals surrounding Empress Dowager Cixi, for instance the rumor that she poisoned most of her own family, were false. They claim that these rumors were started by Edmund Backhouse. Edmund Backhouse forged many of his documents when he created his biography on the Dowager Empress. Thus, the story that we have known for years has been wrong. The reason why the story created by Edmund Backhouse has been ingrained in our minds for decades is because the malicious gossip surrounding the Empress are more fun to read about than the truth.

Overall, this was a very sympathetic biography of Empress Dowager Cixi. Rather than a tyrant, she is depicted as a survivor. Because the authors spent most of their book contradicting the malicious rumors surrounding the empress, they largely focus on how Edmund Backhouse is a con that has created one of the greatest hoaxes in history. For me, the attention spent on Edmund Backhouse was a bit disappointing because it often takes the attention away from their subject. Because of this, the ending was a bit of a letdown. There were also a few inaccuracies that I noticed while reading the book. However, this is really not the fault of the authors. The evidence of these inaccuracies came out after the book was published. For instance, the authors claim that Emperor Guangxu did not die of poisoning. However, scientists in 2008 concluded that he did die of arsenic. I would really like for the authors to have a new edition on the empress to read what they thought about the scientists’ conclusion. Despite these minor details that bothered me on this book, Dragon Lady is compulsively readable, and it gives us a different portrait of the Empress Dowager Cixi. She may not have been the evil and power-hungry empress that we have been lead to believe.