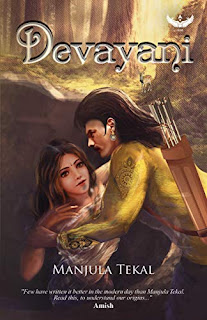 Synopsis: Long before the Ramayana and Mahabharata wars were fought, Yayati, a scion of the lunar dynasty, was the emperor of Aryavarta, the land of the virtuous. He was an ancestor of the Kaurava princes. A tale of love, friendship, betrayal, and passion in the backdrop of a war between the Devas and the Asuras, Devayani, is a modern retelling of an ancient tale from the Mahabharata. Devayani, the self- willed daughter of Sukracharya, the Asura preceptor, became wife of emperor Yayati through a failed love affair with Kacha. How did the princess Sarmishtha, her friend, become her servant and then her rival? Why did Yayati have to ask his children to make the ultimate sacrifice—to give up their youth for him? Devayani takes you on a journey through infatuation, lust, jealousy, rage, betrayal, love and wisdom.Yayati's son Puru would later inherit the land of Saraswati from his father and start the Puru dynasty; the story of which is synonymous with Bharata.

My Review: Devayani retells one of the most complicated love triangles in the Mahabharata. Devayani is a woman who is in love with her father’s disciple, Kacha. However, he ends up refusing to marry her. Shortly after Kacha’s rejection, Devayani has a fight with Sharmishtha. During her fight, she falls down a well and is rescued by King Yayati. To get back at her former lover, she immediately marries King Yayati and becomes his queen. Before she goes to her husband’s kingdom, she wants to get even with Sharmishtha, whom she accuses of trying to kill her, by forcing to become her maid. However, Devayani realizes that her plans for vengeance backfires.
Devayani is a hard character to like. She loves to play the victim card. She believes everyone around her has done her wrong, and she rarely reflects on her own actions. She is a woman that is filled with bitterness and grudges. She is very impulsive which brings trouble to her. When everyone tells her not to make Sharmishtha her maid and to forgive her, she turns a deaf ear to their advice. She is cruel to her husband and does not give him the affection he craves. It is no wonder that he eventually chooses Sharmishtha over her. Thus, Devayani loses everything due to her grievances.
Overall, this novel tells the tragic tale of a woman whose resentments cause her to lose the love and respect of everyone she loves. The moral of the novel is to be merciful. Had Devayani been forgiving, her ending might have turned out differently. The novel is a short, easy read. However, it is very thought-provoking.  All the characters are complex. King Yayati longs for a woman to truly love him. Sharmishtha pursues Yayati because of her jealousy for Devayani and ultimately wins him. There were a few flaws in this novel. Most of the time, it read like a cheesy soap opera, and the love triangle seemed drawn out and made an exhausting read. Despite its flaws, it was still worthwhile. Devayani gives readers another unique perspective to a complex character. I recommend this novel for fans of Lanka’s Princess, The Rise of Sivagami, and The Twentieth Wife!
Rating: 4 out of 5 stars