Anna of Kleve, The Princess in the Portrait (Six Tudor Queens #4) by Alison Weir: A Book Review 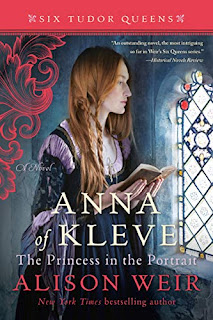 Synopsis:The surprising and dramatic life of the least known of King Henry VIII’s wives is illuminated in the fourth volume in the Six Tudor Queens series—for fans of Philippa Gregory, Hilary Mantel, and The Crown.

Newly widowed and the father of an infant son, Henry VIII realizes he must marry again to ensure the royal succession. Forty-six, overweight, and suffering from gout, Henry is soundly rejected by some of Europe's most eligible princesses. Anna of Kleve, from a small German duchy, is twenty-four, and has a secret she is desperate to keep hidden. Henry commissions her portrait from his court painter, who depicts her from the most flattering perspective. Entranced by the lovely image, Henry is bitterly surprised when Anna arrives in England and he sees her in the flesh. Some think her attractive, but Henry knows he can never love her.

What follows is the fascinating story of an awkward royal union that somehow had to be terminated. Even as Henry begins to warm to his new wife and share her bed, his attention is captivated by one of her maids-of-honor. Will he accuse Anna of adultery as he did Queen Anne Boleyn, and send her to the scaffold? Or will he divorce her and send her home in disgrace? Alison Weir takes a fresh and astonishing look at this remarkable royal marriage by describing it from the point of view of Queen Anna, a young woman with hopes and dreams of her own, alone and fearing for her life in a royal court that rejected her almost from the day she set foot on England’s shore.

My Review: Anne of Cleves is the least favored Tudor queen not only by Henry VIII but also by the public. Writers tend to dismiss her story in favor of the more scandalous Katherine Howard. Because of Henry VIII’s rejection of Anne of Cleves, the public also dismisses her believing her to be dull and plain. In the fourth installment Six Tudor Queens series, Alison Weir attempts to make Anne of Cleves a sympathetic and compelling figure by fleshing out her backstory before she marries Henry VIII.

Alison Weir is one of my favorite authors, and I have admired her Six Tudor Queens series. However, Anne of Cleves was not a compelling figure to me. She was a very passive character throughout the story. Most of the time, I thought that she was simply a spectator in her own story! Also, I was disappointed in Anne of Cleves' backstory. I felt that by giving Anne an implausible backstory gave me the message that Henry VIII was justified in putting her aside in favor of a younger and prettier wife. Thus, Alison Weir did not do Anne of Cleves justice!

Overall, this story is about lost love, renewed love, political and courtly intrigue. There were vivid scenes and the setting seemed very realistic. However, the characters were not fleshed out, and I could not sympathize with Anne of Cleves. This is the worst novel in the Six Tudor Queens series and a major disappointment. I appreciate that the author was trying to put a new spin on the centuries old tale. However, it was not well-executed and went beyond belief. Thus, I recommend it if you are a fan of The Tudors. However, in the meantime, I will be waiting for a better novel that brings freshness and believability to the oft overlooked queen.

Rating: 2½ out of 5 stars
This is a video of Alison Weir talking about the fourth book in the Six Tudor Queens series, Anna of Kleve, The Princess in the Portrait: