I am thrilled to be hosting a spot on the DAUGHTER OF SPARTA by Claire M. Andrews Blog Tour hosted by Rockstar Book Tours. Check out my post and make sure to enter the giveaway!

DAUGHTER OF SPARTA (Daughter of Sparta #1)

Sparta forged her into a deadly weapon. Now the Gods need her to save the world!

Seventeen-year-old Daphne has spent her entire life honing her body and mind into that of a warrior, hoping to be accepted by the unyielding people of ancient Sparta. But an unexpected encounter with the goddess Artemis—who holds Daphne's brother's fate in her hands—upends the life she's worked so hard to build. Nine mysterious items have been stolen from Mount Olympus and if Daphne cannot find them, the gods' waning powers will fade away, the mortal world will descend into chaos, and her brother's life will be forfeit.

Guided by Artemis's twin-the handsome and entirely-too-self-assured god Apollo-Daphne's journey will take her from the labyrinth of the Minotaur to the riddle-spinning Sphinx of Thebes, team her up with mythological legends such as Theseus and Hippolyta of the Amazons, and pit her against the gods themselves.

A reinterpretation of the classic Greek myth of Daphne and Apollo, Daughter of Sparta by debut author Claire Andrews turns the traditionally male-dominated mythology we know into a heart-pounding and empowering female-led adventure.

Praise for DAUGHTER OF SPARTA:

"A fresh, original spin on classic Greek mythology. Andrews is a debut to watch; Daughter of Sparta is an action-packed adventure with phenomenal writing and empowering female characters that are sure to pack a punch. I was absolutely enamored by this book!"—Adalyn Grace, New York Times bestselling author of the All the Stars and Teeth series

"Daughter of Sparta deftly weaves classic Greek myth into a spellbinding adventure led by a fierce and complex heroine. An utterly transportive and breathtaking debut."—Katy Rose Pool, author of There Will Come a Darkness

"Claire Andrews' Daughter of Sparta is an epic story about female empowerment, packed with romance, adventure and mystery. This fast-paced and well-researched novel was truly difficult to put down!"—June Hur, author of The Forest of Stolen Girls

"A strong female-led adventure story with an underlying romance."—SLC

"Daphne, a Mothakes (stranger) to the people of Sparta, is a well-trained fighter determined to prove to King Menelaus and Queen Helen that she is as good or better than any other.... The Daphne of myth was a naiad stalked by an ensorcelled Apollo, who transformed into a tree to escape him. This twist on the narrative is great for readers aging out of Rick Riordan’s books."—Booklist 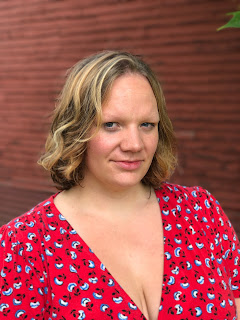 Claire Andrews was raised in both Alaska and Scotland, but currently lives in Vermont; when not writing, she can usually be found outside swimming, skiing or hiking across the state's famous green mountains. Daughter of Sparta is her debut novel.

3 winners will receive a finished copy of DAUGHTER OF SPARTA, US Only.