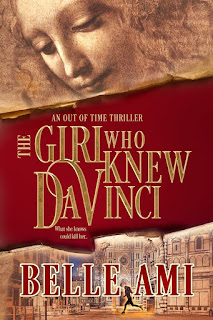 Source: This book was given to me by Book Unleashed Blog Tours in exchange for an honest review.

What she knows could kill her.
In the spirit of The Da Vinci Code by Dan Brown and Shadows of the Stone Benders by K. Patrick Donoghue The Girl Who Knew Da Vinci by Belle Ami unravels an unforgettable mystery.
Three destinies, one remarkable painting.
Will her visions lead her to the truth?
Art historian Angela Renatus is haunted by dreams of Leonardo da Vinci and a mysterious painting of Giuliano Medici and his mistress Fioretta Gorini. A painting that, as far as the world knows, doesn’t exist. Compelled by her visions, Angela is determined to find out the truth.
When Angela is contacted by art detective, Alex Caine, she’s shocked to learn that he too is seeking the same painting. Alex’s client, a wealthy German financier, is determined to clear the name of his late uncle, Gerard Jaeger, an art historian, who went missing in Florence, during World War II. In letters written before his disappearance, the historian describes his love affair with a beautiful young Italian woman named Sophia Caro, and the discovery of an extraordinary painting by the great master himself—a painting depicting Giuliano and Fioretta.
Alex and Angela journey to Florence in search of the priceless treasure. Is it a lost da Vinci, potentially worth hundreds of millions of dollars, or a wild goose-chase that will only lead to a dead end? But someone else is searching for the illusive painting—Alberto Scordato is a powerful man in the art world and a sociopath who will stop at nothing to get what he wants, even murder. Scordato knows something about Angela that even she doesn’t know, something that could threaten both Angela and Alex’s lives, forcing them into the crosshairs of fate.
Add to Goodreads


Angela is an art historian who specializes in the Renaissance. One day, she receives mysterious dreams of Leonardo da Vinci and the mysterious painting he created of Giuliano de Medici and his mistress, Fioretta. It is assumed that this painting does not exist. However, Angela sets out to discover the truth. She is joined by Alex, an art detective, who is also after the painting. As they begin their hunt, she learns that there are others who are also seeking the lost painting. In a race to get to the painting, can Angela and Alex get their hands on it first?

Angela was a very flat and passive character. Throughout most of the novel, she is unconscious. She experiences her past lives as Fioretta in Renaissance Italy and Sophia in WWII. When she is awake, she spends most of her time making love to Alex rather than searching for the mysterious painting. Therefore, she did not do much in the novel. She did not have much of a personality and was a Mary Sue. She was mostly a damsel-in-distress.

Sophia was also not given much to do in the novel except that she hid the painting during WWII. The character who I thought was the most interesting was Fioretta. She was feisty, sarcastic, and romantic. However, she did not have many chapters in the novel. I would have loved if the star-crossed love story between Giuliano and Fioretta was more developed and focused on because their romance started the course in the novel. Leonardo da Vinci is briefly featured in the novel, and I would have liked there to be more interactions with Leonardo because the title would have made more sense.

Overall, this book is filled with romance, mystery, and ghosts. The main love interest was bland, and the villains were cartoonish and lacking in depth. The Girl Who Knew Da Vinci moved at a slow pace and did not feel much like a thriller. It does not pick up until the very end. Still, I was drawn to the reincarnation element in the story and thought that it was well done. I also liked the historical aspects, most notably Fioretta’s storyline, in the novel. I thought the author had done her homework. I recommend this novel for fans of The Memory Painter, Juliet, and I, Mona Lisa. 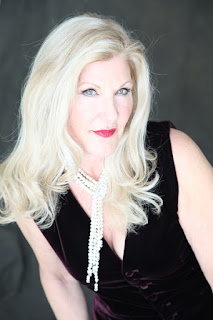 Belle Ami writes intriguing romantic/suspense/thrillers with a teaspoon of sex. A self-confessed news junky she loves to create cutting-edge stories about politics, espionage, and redemptive love.
She is a Kathryn McBride scholar of Bryn Mawr College in Pennsylvania. Writing, cooking, spinning, hiking, boxing, and skiing are her passions.
She is the author of The Only One series, The One (#1), and The One & More (#2). Her third in the series titled One More Time is Not Enough, was published July 13th, 2016. She was honored to be included in the RWA LARA Christmas Anthology Holiday Ever After featuring her short story "The Christmas Encounter". Her next series entitled The Tip of the Spear begins with Escape, published January 10, 2017. The sequel to Escape, entitled Vengeance was published September 12, 2017.
The Girl Who Knew da Vinci is her latest release. It’s an intriguing romance/paranormal/thriller. She is currently working on book three of The Tip of the Spear Series, titled Ransom.
She lives in Southern California with her husband, two children, a horse named Cindy Crawford, and her brilliant Chihuahua, Giorgio Armani.
Official website: http://www.belleamiauthor.com
Social Media Links: Facebook | Twitter | Pinterest | Linked-In | Instagram