Carolina of Orange-Nassau: Ancestress of the Royal Houses of Europe by Moniek Bloks: A Book Review 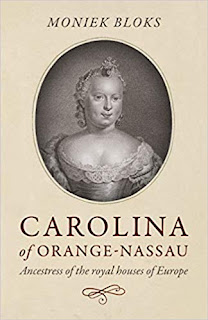 Carolina of Orange-Nassau: Ancestress of the Royal Houses of Europe
Author: Moniek Bloks
Genre: Nonfiction, History, Biography
Publisher: Chronos Books
Release Date: January 25, 2019
Pages: 97
Source: Netgalley/Publisher in exchange for an honest review.
Synopsis: Carolina of Orange-Nassau (1743 – 1787) was born the daughter of William IV, Prince of Orange, and Anne, Princess Royal and was thus the granddaughter of King George II. It was upon the King's orders that she was named after his wife, Caroline of Ansbach. She was the first of Anne and William's children to survive to adulthood. When her father was at last made stadtholder of all seven united provinces, Carolina was included in the line of succession, in the event she had no brothers. A brother was eventually born, but due to his weak health, she remained an important figure. Carolina married Charles Christian of Nassau-Weilburg and suffered the loss of half her children, either in childbirth or infancy. Despite this, she acted as regent for her minor brother while heavily pregnant and remained devoted to him and the Dutch republic. Her children married well and her descendants sit upon the royal thrones of Europe, truly making her a grandmother of Europe.

Carolina is the granddaughter of King George II and Caroline of Ansbach. Her parents were William IV, the Prince of Orange, and Anne, the Princess Royal. She married Charles Christian, Prince of Nassau-Weilburg. She would give birth to 16 children. Carolina had a passion for arts and was the patroness of Mozart. Unfortunately, Carolina had an illness and died at the age of 44.

While Carolina’s life was short-lived, it seemed that she was a woman of significance. The author gives us a list of every royal who is descended from her and the list is long. Some of her descendants are King Willem-Alexander of the Netherlands, King Philippe of Belgium. Queen Margrethe II of Denmark, King Harald V of Norway, King Carl XVI Gustaf of Sweden, Queen Elizabeth II of Great Britain, and King Felipe VI of Spain. Thus, Carolina has made an important contribution to history.

I was a bit disappointed by this book’s length, which is 97 pages. Because there has not been a biography of this fascinating woman, I was sad that this book was not in-depth and only gave me a brief overview about her life. Instead of a detailed story, the author just gives me a list of dates and facts without much of an explanation of who these people were. For example, the author just gives us a list of Carolina’s husband, but gives us no backstory on him or why Carolina chose him as her husband. Instead of fleshing out the facts on her life, the author spends a chapter on all the castles that Carolina has lived in, which I found interesting but completely irrelevant in a biography. I was also a little disappointed that the author was given access to many of her letters, but only included very few snippets into the book.

Overall, this was a short and very easy to read biography of Carolina of Orange-Nassau. However, this book had the makings to be an excellent biography, but it was disorganized and not well-formed. I still recommend this for those who have never heard of Carolina and would like to read a light biography on this forgotten royal. However, for those who would like an in-depth biography on her, will still have to wait a little longer. Carolina of Orange-Nassau does bring a significant woman out from obscurity.