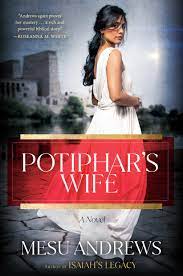 Synopsis: One of the Bible’s most notorious women longs for a love she cannot have in this captivating novel from the award-winning author of Isaiah’s Legacy.

Before she is Potiphar’s wife, Zuleika is the daughter of a king and the wife of a prince. She rules the isle of Crete alongside her mother in the absence of their seafaring husbands. But when tragedy nearly destroys Crete, Zuleika must sacrifice her future to save the Minoan people she loves.

Zuleika’s father believes his robust trade with Egypt will ensure Pharaoh’s obligation to marry his daughter, including a bride price hefty enough to save Crete. But Pharaoh refuses and gives her instead to Potiphar, the captain of his bodyguards: a crusty bachelor twice her age, who would rather have a new horse than a Minoan wife.

Abandoned by her father, rejected by Pharaoh, and humiliated by Potiphar’s indifference, Zuleika yearns for the homeland she adores. In the political hotbed of Egypt’s foreign dynasty, her obsession to return to Crete spirals into deception. When she betrays Joseph—her Hebrew servant with the face and body of the gods—she discovers only one love is worth risking everything.

My Review: Potiphar’s wife is one of the bad girls in The Bible. She framed and sent Joseph to jail because he rejected her advances. In this retelling of the infamous event, Mrs. Andrews gives Potiphar’s wife a voice. Through Potiphar’s wife’s eyes, the reader gets to know her background and her motivations for framing Joseph. She also has a name that was not mentioned in The Bible. Her name in this novel is Zuleika.

Zuleika was once the crown princess of Crete. Her husband and mother die in an earthquake and the kingdom is destroyed by the natural disaster. With hopes of rebuilding her homeland, she travels to Egypt and offers herself as a bride for the pharaoh. However, the pharaoh gives her to his best friend, Potiphar. There she meets Potiphar’s right-hand man named Joseph. This unleashes a chain of events that would lead her to commit her horrible act of framing an innocent man.

Zuleika is a sympathetic but not often likable protagonist. Because she was once a princess and comes from a culture where women ruled when their husbands were absent, she often assumes that Potiphar will let her run the estate when he is away. However, Potiphar makes Joseph ruler in his stead. Zuleika is not happy with being powerless and confined to her rooms as a docile wife. She also wants the power to manage her own household. Therefore, Zuleika and Joseph are wrapped in a power struggle. Zulieka goes through many tragic events. However, she’s made many bad choices. These bad choices really made it hard to like her. She also can be ruthless at times. Still, she suffered through so many hardships that she becomes a pitiful woman by the time she frames Joseph. Thus, Zukeika was an unhappy woman who was trying to find her happiness.

The supporting characters are more fascinating than Zuleika. My favorite character in this story is Joseph, who is the true hero of this novel. His faith is tested by God, and he remains very faithful to him. With God’s love, he becomes stronger no matter his hardships. Thus, Joseph is a very admirable character. I also like Zuleika’s Hebrew maid, Ahira. Ahira suffered many hardships. However, she finds healing through God’s love and mercy. Potiphar is also an interesting character who is faithful to his best friend, the Pharaoh. Thus, all the supporting characters are very complex and realistic.

Overall, this novel is about loss, repentance, and forgiveness. The message of this book is that God has a plan for everyone. There are a few drawbacks to this novel. The plot is very simple and because of it seemed drawn out. It could easily have been shorter. The pacing of the story is also uneven. It moves at a slow pace from the beginning to the middle. The last part of the novel seemed very rushed. Nevertheless, Potiphar’s Wife gives readers a deeper look at the infamous villainess. I recommend this novel for fans of The Red Tent, The Dream Weaver’s Bride, and Asenath!