June 18, 2020
Dave Tamanini sheds some light on a most fascinating subject - the Salem witchcraft trials. Several people are familiar with the basics of this disturbing period in colonial history. We’ve all heard about the false accusations, the outlandish interrogations, and the tragic executions. However, very few know how and why the witch hunts began. What, or rather, who, sparked them? Thank you, Mr. Tamanini!

Ask just about anyone what they know about Salem in colonial Massachusetts and the most common answer is the witch hunts. But in the middle and late 1600s people knew Salem Town for its shipping. It was the first large seaport in the Massachusetts Bay colony. Salem seafarers and merchants played an important role as the Puritans grew wealth through trade between the mother country and the colony. As the town grew wealthier, it expanded as newcomers arrived and moved inland to establish fertile farms to feed the coastal population. Salem farms, also called Salem Village was established on the outskirts of the harbor town. And that village became ground zero for the first witchcraft accusations in 1692 after people accused an enslaved woman named Tituba of serving the devil by hurting children. Tituba’s owner was the village minister. Her alleged first victims were her master’s children Betty Parris and Abigail Williams, along with a neighbor child, Ann Putnam, Jr.

The history books and records tell us what Tituba said and did after they arrested and charged her. But there is no information, not an inkling, of what she was like as a human being.

Most of the others involved in the Salem tragedy, those afflicted by witches, the judges, witnesses and the accused, have modern descendants scattered around the globe. For many of the descendants, it seems to be a mark of pride when they identify an ancestor involved in the Salem witchcraft story. Tituba is an exception because no one knows what happened to her.

Court records show the how and why Tituba was charged. They show she at first denied the crime until she was “interrogated”. And after they persuaded her to confess, she surprised them all by naming two other women as fellow witches, servants of the devil. In subsequent court hearings Tituba called out the existence of more witches, some of them flying in from distant Boston! 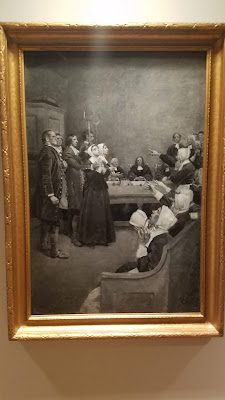 The written documentation lays out the latent fears the Puritan colonists lived with. Those fears in some combination lead to the hysteria that drove hundreds of accusations, dozens of trials, and 19 hangings of innocent people during six months of infamy.
They have preserved sworn depositions and court transcripts in museums and universities. And although the records detail the kangaroo court proceedings, and their rush to judgement with imaginary visions of specters as valid evidence, many questions remain. Historians still comb through occasional newly discovered information. And even so, after analyzing village, town, and colonial government records, parish records and sermon books, the root causes of the events remain shrouded in mystery.

The elusive woman of color, Tituba, who opened the door to the wild accusations of neighbor against neighbor remains a mystery too. No one preserved records of an uneducated slave, one considered by most to be less than fully human.

Enter the novelist. Without clear evidence of Tituba’s origins and her character, creative fiction can fill the void of a memorable woman erased from history. Her name, Tituba, roughly translated from the west African Yoruba language means one who appeases.  Why would an appeaser turn on her masters, then? Dave Tamanini offers his own provocative tale of what happened and why with a bit of magic thrown in. 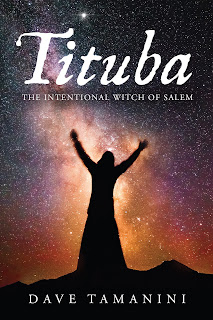 Tituba: The Intentional Witch of Salem
Release Date: May 13, 2020
Pages: 319
Synopsis: A Promise and a Hope

Enslaved Tituba has been faithful to a promise to her dying mama in Africa. She has appeased the masters from Barbados to Boston to Salem and waited for her magic.

When Tituba’s only son dies trying to escape slavery, her life changes forever. After enduring the crush only a mother can feel, she rages and turns to vengeance.

The villagers see witches and demons everywhere. Their ministers say the Devil has sent them to steal souls. But they are wrong. It is Tituba—disobeying an ancient rule—conjuring terrifying images with magic that sparks the infamous witch hunts of 1692.

As neighbors accuse neighbors of witchcraft, hysterical trials follow. And Tituba gloats in her power. But when hangings begin, her conscience arises. Can she confront her secret crime? And when a chance for redemption presents itself, will she take it?

Tituba THE INTENTIONAL WITCH OF SALEM, with a magical point of view, explores the emotions and reasons driving this unstable time.

Dave Tamanini took a while to become a fiction author. Born in the northeastern coal region of Pennsylvania, he lived a nomadic childhood while growing up in a U.S. Army family. He was the first to head off to college. And after earning a B.A. degree at the University of Maryland, he landed a job as a civil rights investigator of race and gender discrimination. That work in the legal field led to the University of Detroit Law School and then private law practice for over thirty years. There is no better work than lawyering to prepare for writing fiction, he says. You get to help clients from all walks of life and learn about human strength, frailty… and hypocrisy. You can reach Dave at: www.DaveTamaniniAuthor.com.