Queen of Oak: A Novel of Boudica (The Celtic Rebels #1) by Melanie Karsak: A Book Review 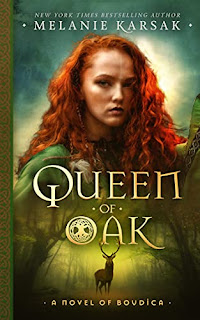 Queen of Oak: A Novel of Boudica (The Celtic Rebels #1)

Synopsis: Fated to lead a rebellion against Rome.

Destined to become a legend.

Britain, A.D. 42—Boudica, second daughter of a Celtic king, has little concern for tribal tensions and political intrigues. Called by the gods and the stirrings of her own wild heart, she listens instead to whispers of the oaks. But Boudica would be wiser to heed the warning cries of eagles.

Rumors abound that the Romans are amassing forces for another invasion. In an effort to consolidate power, Boudica’s father turns to Prasutagus, the formidable ruler of the Greater Iceni. To win Prasutagus’s aid, Boudica’s father must strike a bargain—a deal with implications beyond Boudica’s imagining.

My Review: Boudica is the second daughter of a Celtic king. She has no taste for getting involved with politics. However, she is called by the Celtic gods to beware of the Eagles. The Eagles are the Romans that are about to invade her beloved homeland. In order to protect them from the Romans, Boudicca’s father enters into an alliance with Prasutagus.

Boudica is one of the most famous queens in Great Britain. Yet, novelists have rarely focused on Boudica’s teen years. This novel gives the reader a glimpse of what Boudica might have been like as an adolescent. I really like Mrs. Karsak’s version of Boudica. Boudica is very carefree. She loves her home and it’s surroundings. I identified with her and the difficult choices that she had to make. Thus, not only was Boudica a strong character, but she was also very realistic and relatable.

Overall, this was a coming of age story of Boudica. As soon as you open up the first page, Mrs. Karsak sucks you into Celtic Britain. The past immediately becomes alive with vivid descriptions and a large cast of characters. All of the characters are realistic and complex. The author also does an excellent job using magical elements in her story. I love how the setting of Celtic Britain seems very mystical. Boudica’s Britain was before the conversion of Christianity. Thus, Britain appeared very magical that verged on faerie lore. Religion was an important aspect of the book, and I loved how Mrs. Karsak handled it! Thus, Queen of the Oak is a breathtaking and mesmerizing novel about the infamous British warrior queen! I loved this novel so much that I can’t wait for the sequel! I am excited to see how Mrs. Karsak will continue to portray Boudica’s story! I recommend this for fans of Mists of Avalon, Daughter of Destiny, and The Lost Queen!