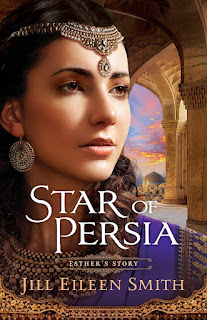 Star of Persia: Esther’s Story
Author: Jill Eileen Smith
Genre: Christain, Historical Fiction, Biblical Fiction
Publisher: Fleming H. Revell Company
Release Date: 2020
Pages: 368
Source: Netgalley/Publisher in exchange for an honest review.
Synopsis: In an effort to complete a war his father had planned to win, King Xerxes calls every governor, satrap, and official in his vast kingdom to his palace in Susa to strategize and feast. When they finally leave, he decides on one more week of frivolity, which ends in the banishment of his favorite wife, something he never intended to do. But when he discovers Esther, Xerxes is sure he has a second chance at happiness.
In her wildest dreams, Esther could never have imagined that she would end up as queen of Persia. Yet she knows better than to become complacent. Another of Xerxes's wives is vying for position, and his closest advisor has a deep and dangerous grudge against Esther's adoptive father. Caught in the middle of palace politics, Esther will find herself in an impossible position: risk her life or consign her people to annihilation.
With her impeccable research and her imaginative flair, Jill Eileen Smith brings to life the romantic, suspenseful, and beloved story of Esther, queen of Persia.
My Review: Esther is a Jewish woman who is comfortable with her simple life. However, her world is interrupted when she is selected to be a candidate for Queen of Babylon. Reluctantly, Esther enters the palace and is eventually chosen to become queen. Yet, she realizes that life in the palace is very dangerous. Esther is caught in the middle of politics. She learns that there is a conspiracy to annihilate her people. She uses her position as queen to save her people.
“The Book of Esther” is one of my favorite books in The Bible. I love her rags-to-riches story. Thus, everytime I read a retelling of “The Book of Esther'' from other biblical fiction authors, it never gets old because each of them portray Esther’s story in a different way. Thus, I was delighted to read Jill Eileen Smith’s Star of Persia, and I immediately devoured it. Jill Eileen Smith made Esther a strong heroine that readers will love!
Jill Eilleen Smith’s Esther is very relatable. She is a young woman that is very comfortable with her life. She loves her friends and her uncle. She yearns to marry the boy she has a crush on. Yet, when she is chosen to enter the palace, she comes to terms with her situation. She is ambitious and becomes queen. Esther takes her duties as queen very seriously. She is a devoted wife and step-mother. Thus, I found her to be a very good queen consort.
Overall, this novel is full of hope, faith,  love, and courage. The message of this novel is that God uses ordinary people to change history. Esther was a simple Jewish orphan who became queen and thus saved many lives. I also liked how Mrs. Smith weaves historical figures and events into this Biblical tale. The relationship between Esther and Xerxes was very sweet! Thus, Star of Persia is a fascinating retelling of an extraordinary queen. I recommend this novel for fans of Angela Hunt, Mesu Andrews, and H.B. Moore!
Rating: 5 out of 5 stars