The Harp of Kings (Warrior Bards #1) by Juliet Marillier: A Book Review 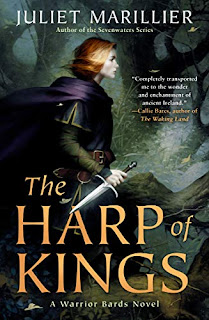 Genre: Historical Fiction, Fantasy
Publisher: Ace
Release Date: 2019
Pages: 463
Source: Netgalley/Publisher in exchange for an honest review
Synopsis:A young woman is both a bard--and a warrior--in this thrilling historical fantasy from the author of the Sevenwaters novels.
Eighteen-year-old Liobhan is a powerful singer and an expert whistle player. Her brother has a voice to melt the hardest heart, and a rare talent on the harp. But Liobhan's burning ambition is to join the elite warrior band on Swan Island. She and her brother train there to compete for places, and find themselves joining a mission while still candidates. Their unusual blend of skills makes them ideal for this particular job, which requires going undercover as traveling minstrels. For Swan Island trains both warriors and spies.
Their mission: to find and retrieve a precious harp, an ancient symbol of kingship, which has gone mysteriously missing. If the instrument is not played at the upcoming coronation, the candidate will not be accepted and the people could revolt. Faced with plotting courtiers and tight-lipped druids, an insightful storyteller, and a boorish Crown Prince, Liobhan soon realizes an Otherworld power may be meddling in the affairs of the kingdom. When ambition clashes with conscience, Liobhan must make a bold decision and is faced with a heartbreaking choice...
My Review: Liobhan is a warrior with her brother Brocc. They are joined by their fellow warrior named Dau to find a missing harp, which is a sign of kingship. With this harp, the crown prince can be crowned and easily transition to the throne. However, when they arrive, they realize that all is not as it seems. Liobhan learns that the Crown Prince is cruel and that the fae world may be involved. What is the truth behind the missing harp?
The Warrior Bards is a spin-off from Blackthorn & Grim novels. This series focuses on Blackthorn and Grim’s children. However, I found it to be a complete departure from the original series. The new series was not as engaging as the previous series. While Blackthorn and Grim focused on enchanting fairy tales, The Warrior Bard series focused on gritty politics and was more realistic with a dash of fantasy mixed in.
The characters were very bland. Going into this story, I expected to see many action scenes with Liobhan fighting many battles. However, I barely got any fighting scenes. Instead, Liobhan was mostly a servant in the castle. This was disappointing because this was not what I was promised in the novel. Liobhan also did not seem like a strong character. She was mostly a damsel-in-distress that needed saving. Thus, Liobhan was very different from how Mrs. Marillier portrays her heroines. Her usual heroines are tough, who go through challenges and are forced to make difficult choices. However, Liobhan does not seem to struggle as much and does not have to make any hard choices. Her brother, Brocc, was the typical handsome singer with not much personality. Dau is the usual brooding rich boy who is the usual stereotypical love interest.
Overall, this novel is full of courtly intrigue, music, and politics. Mrs. Marillier has always excelled in writing gorgeous prose and this is no different. The world-building is well-crafted. However, the story is not as magical as her previous works. The story is simple and slow moving. It is not a character-driven story because they do not have hardly any depth to them. Thus, I recommend it for those that are interested in reading about female warriors. However, for those who wish to get lost in Mrs. Marillier’s mystical world, I advise you to stick to her previous novels.
Rating: 2 ½ out of 5 stars
Here is the official book trailer for Harp of Kings: