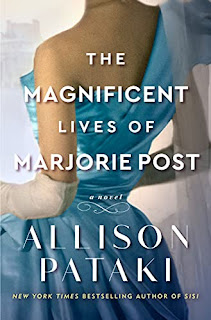 The Magnificent Lives of Marjorie Post
Author: Allison Pataki
Genre: Historical Fiction
Publisher: Ballantine
Release Date: February 15, 2022
Pages: 381
Source: Netgalley/Publisher in exchange for an honest review.
Synopsis: Mrs. Post, the President and First Lady are here to see you. . . . So begins another average evening for Marjorie Merriweather Post. Presidents have come and gone, but she has hosted them all. Growing up in the modest farmlands of Battle Creek, Michigan, Marjorie was inspired by a few simple rules: always think for yourself, never take success for granted, and work hard—even when deemed American royalty, even while covered in imperial diamonds. Marjorie had an insatiable drive to live and love and to give more than she got. From crawling through Moscow warehouses to rescue the Tsar’s treasures to outrunning the Nazis in London, from serving the homeless of the Great Depression to entertaining Roosevelts, Kennedys, and Hollywood’s biggest stars, Marjorie Merriweather Post lived an epic life few could imagine.

Marjorie’s journey began gluing cereal boxes in her father’s barn as a young girl. No one could have predicted that C. W. Post’s Cereal Company would grow into the General Foods empire and reshape the American way of life, with Marjorie as its heiress and leading lady. Not content to stay in her prescribed roles of high-society wife, mother, and hostess, Marjorie dared to demand more, making history in the process. Before turning thirty she amassed millions, becoming the wealthiest woman in the United States. But it was her life-force, advocacy, passion, and adventurous spirit that led to her stunning legacy.

And yet Marjorie’s story, though full of beauty and grandeur, set in the palatial homes she built such as Mar-a-Lago, was equally marked by challenge and tumult. A wife four times over, Marjorie sought her happily-ever-after with the blue-blooded party boy who could not outrun his demons, the charismatic financier whose charm turned to betrayal, the international diplomat with a dark side, and the bon vivant whose shocking secrets would shake Marjorie and all of society. Marjorie did everything on a grand scale, especially when it came to love.

Bestselling and acclaimed author Allison Pataki has crafted an intimate portrait of a larger-than-life woman, a powerful story of one woman falling in love with her own voice and embracing her own power while shaping history in the process.

My Review: Marjorie Merriweather Post was an entrepreneur and businesswoman. In this biographical novel, Marjorie narrates her life from the time she was gluing cereal boxes for her dad’s company in her father’s barn to her final moments. Before she turned thirty, she became the wealthiest woman in America. This novel also chronicles her four disastrous marriages. The Magnificent Lives of Marjorie Post tells the tale of a wealthy woman who spent her life searching for love.

Before reading this novel, I did not know much about the life of Marjorie Post. However, this novel shows that she lived a fascinating life. She inherited a successful business from her father and was a major philanthropist. Yet, I could not connect with Marjorie Post. Marjorie Post seemed very vain and selfish. She desires to be loved by all. The novel also spends a lot of time on her romances. Marjorie rushes headlong into marriage and always chooses bad men. She never seems to learn from her mistakes, and her marriages keep ending the same way. Therefore, Majorie Post was a very annoying and vain character. I did not feel sorry for her difficulties because I could not connect with her.

Overall, this novel tells of heartbreaks, ambition, and wealth. The characters are mostly bland. Marjorie’s husbands are stereotypical bad guys. The novel is very repetitive. Most of the novel focuses on her romances or how much she spent on her sumptuous and lavish lifestyle. The parts I did like were the scenes depicting her business, and I like the relationship with her father. I wished that this novel focused more on her career and her philanthropy. Therefore, The Magnificent Lives of Marjorie Post reads like a soap opera because it has enough glitz, glamor, and drama that it will keep you entertained. I recommend this for fans of American Princess, American Duchess, and The Second Mrs. Astor!