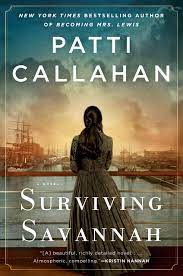 Surviving Savannah
Author: Patti Callahan
Genre: Historical Fiction, Contemporary Women’s Fiction
Publisher: Berkley
Release Date: 2021
Pages: 431
Source: My State Public Library
Synopsis: It was called "The Titanic of the South." The luxury steamship sank in 1838 with Savannah's elite on board; through time, their fates were forgotten--until the wreck was found, and now their story is finally being told in this breathtaking novel from the New York Times bestselling author of Becoming Mrs. Lewis.

When Savannah history professor Everly Winthrop is asked to guest-curate a new museum collection focusing on artifacts recovered from the steamship Pulaski, she's shocked. The ship sank after a boiler explosion in 1838, and the wreckage was just discovered, 180 years later. Everly can't resist the opportunity to try to solve some of the mysteries and myths surrounding the devastating night of its sinking.

Everly's research leads her to the astounding history of a family of eleven who boarded the Pulaski together, and the extraordinary stories of two women from this family: a known survivor, Augusta Longstreet, and her niece, Lilly Forsyth, who was never found, along with her child. These aristocratic women were part of Savannah's society, but when the ship exploded, each was faced with difficult and heartbreaking decisions. This is a moving and powerful exploration of what women will do to endure in the face of tragedy, the role fate plays, and the myriad ways we survive the surviving.

My Review: On June 14, 1838, a luxurious American steamship named Pulaski was traveling from Savannah, Georgia to Baltimore, Maryland. However, it crashed thirty miles off of North Carolina. The ship lost almost two-thirds of its passengers and crew. This event has been known as the South’s Titanic. Mrs. Callahan retells this tragic event by following two female passengers, Lily and Augusta. It also tells the story of a modern-day historian who is trying to piece together the events of that night.

I had never heard the story of the Pulaski before so I have to say that this subject was very interesting to read. I was particularly interested in Augusta and her niece, Lily. Because their stories slowly unravel throughout the novel, I found myself impatient to get to learn their fates. I wanted to skip the modern-day parts just to get to theirs. However, I forced myself to be patient because I wanted to know the connection between the modern and the historical. Lily and Augusta are very strong and relatable characters. They went through many tragedies and hardships as they fought for survival. I found their stories to be very moving.

The modern day storyline really did not appeal to me. Most of the storyline seemed very repetitive and drawn out. Everly did not really play much of a role in the story. She was mostly flat. I was mostly indifferent to her story. She kept pushing people away. She really had no personality except her grief over her best friend. I found the other characters in her story to be more interesting than her. Thus, I did not find Everly a compelling character, and I thought the modern-day storyline was unnecessary to the overall plot.

Overall, this novel is about grief, injustice, and survival. The story did have a predictable ending and could have been shorter. While the historical aspect is very heart wrenching and emotional, the contemporary storyline seems like a light beach read. Still, I found the events of the Pulaski to be very fascinating. Surviving Savannah is a very well-written and meticulously researched novel. Mrs. Callahan does bring to light a forgotten and tragic historical event. I recommend this to fans of The Girl Who Came Home, The Ghost of Mary Celeste, and The Deep!

This is a video of Patti Callahan discussing her book, Surviving Savannah: