The Last White Rose: A Novel About Elizabeth of York by Alison Weir: A Book Review 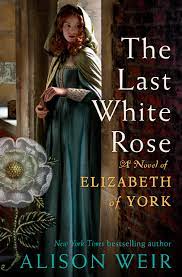 The Last White Rose: A Novel of Elizabeth of York

Elizabeth of York is the oldest daughter of King Edward IV. Flame-haired, beautiful, and sweet-natured, she is adored by her family; yet her life is suddenly disrupted when her beloved father dies in the prime of life. Her uncle, the notorious Richard III, takes advantage of King Edward’s death to grab the throne and imprison Elizabeth’s two younger brothers, the rightful royal heirs. Forever afterward known as "the Princes in the Tower," the boys are never seen again. On the heels of this tragedy, Elizabeth is subjected to Richard’s overtures to make her his wife, further legitimizing his claim to the throne. King Richard has murdered her brothers, yet she feels she must accept his proposal.

As if in a fairy tale, Elizabeth is saved by Henry Tudor, who challenges Richard and defeats him at the legendary Battle of Bosworth Field. Following his victory, Henry becomes king and asks Elizabeth to be his wife, the first queen of the Tudor line. The marriage is happy and fruitful, not only uniting the warring houses of Lancaster and York—the red and white roses—but producing four surviving children, one of whom, Henry VIII, will rule the country for the next thirty-six years.

As in her popular Six Tudor Queens series, Alison Weir captures the personality of one of Britain’s most important consorts, conveying Elizabeth of York’s dramatic life in a novel that is all the richer because of its firm basis in history.

My Review: Elizabeth of York was the daughter, sister, niece, wife, and mother of English kings. In this historical novel, Alison Weir dramatizes Elizabeth of York’s life. Elizabeth of York was a York princess during the War of the Roses. Elizabeth’s marriage to Henry Tudor ended the civil war, and she became the first Tudor queen. Because she was the eldest surviving child of Edward IV, she should have been a sovereign, but since England did not recognize a woman as a sovereign, she was seen merely as a consort. This novel tells the story of a queen who worked to preserve her new dynasty at all costs.

Elizabeth of York led a very fascinating and turbulent life. However, I did not really see Elizabeth as a complex character. She is mostly passive, reluctant, and hesitant. She seemed more like a cardboard cutout than a fully fleshed out character as the story progresses. This is most likely because the novel suffered from telling and not showing. I did not feel any emotions when Elizabeth of York experienced many difficulties. It felt as if I was rereading Mrs. Weir’s nonfiction biography Elizabeth of York with a bit of dialogue thrown in. Thus, Elizabeth of York was not a compelling character that drew me into her story.

Overall, this novel is about grief, duty, and survival. The characters were very flat, stilted, and had little depth. The story is as dry as a textbook, had many repetitive sections, and was very drawn out. The Last White Rose sticks very closely to Mrs. Weir’s nonfiction book, Elizabeth of York. Because she very seldom deviates from her previous book, it feels like this historical novel is unnecessary. I have to admit that I enjoyed her non-fiction biography of this queen more than this fictional novel. Mrs. Weir had the opportunity to make Elizabeth and other fascinating characters such as Elizabeth Woodville, Margaret Beaufort, Cecily Neville, Richard III, and Henry Tudor into rich characters and tell an enthralling dramatic story, but sadly she could not pull it off. It was mostly a summary of major events. The positives is that because it was based off of her nonfiction work, it was mostly accurate and stuck to known facts. It was also very meticulously researched. Mrs. Weir has a talent for vivid imagery, and she did an excellent job in making the Tudor court come alive. While I prefer Mrs. Weir’s nonfiction biography of Elizabeth of York, I have to say that The White Princess by Philippa Gregory and The King’s Daughter by Sandra Worth are more superior fictionalized versions of Elizabeth of York’s story. Still, The Last White Rose is still an enjoyable read for fans of the Tudors because it tells of the story of the dynasty’s early beginnings. I recommend this for fans of Anne Easter Smith, Anne O’Brien, and Joanna Hickson!