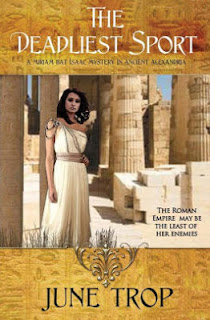 The Deadliest Sport: A Miriam bat Isaac Mystery in Ancient Alexandria
Author: June Trop
Genre: Historical Fiction, Mystery
Publisher: Black Opal Books
Release Date: 2017
Pages: 242
Source: This book was given to me by iRead Book Tours in exchange for an honest review.
Synopsis: Miriam bat Isaac, a budding alchemist in first-century CE Alexandria, welcomes her twin brother Binyamin home to fight his last gladiatorial bout in Alexandria. But when he demands his share of the family money so he can build a school for gladiators in Alexandria, Miriam explains that he forsook his share when he took the gladiatorial oath.

When she refuses to loan him the money for what she feels is a shady and dangerous enterprise, Binyamin becomes furious. Soon after, the will of Amram, Miriam's elderly charge, turns up missing; Amram becomes seriously ill; and the clerk of the public records house is murdered. Could Binyamin really be behind this monstrous scheme? If not he, who could be responsible? And is Miriam slated to be the next victim?

My Review: Miriam bat Isaac is an aspiring alchemist. She greets her gladiator brother Binyamin back home for his last fight in Alexandria. However, he demands his sister to give him back his inheritance that he forsook when he became a gladiator. He plans to use the money to build his own gladiatorial school. When Miriam refuses, Binyamin is furious and tries to come up with another way to get his inheritance back. When Miriam’s eldest charge Amram is on his deathbed, the will that lists Miriam as heir turns up missing. She also learns that the clerk who is responsible for the will is murdered. She suspects that Binyamin is involved. Miriam investigates the case to see if Binyamin really did murder the clerk in an attempt to get his inheritance back. As Miriam delves deeper into the case, she is confronted to make the decision between family and justice.

Miriam is an engaging character. She’s smart, sassy, responsible, and tough! She is also a very determined individual. She continues to fight for her beliefs even when going against her own brother. I really loved Miriam when she is forced to make hard choices. I could relate to her when she is conflicted over the situation. However, she always tries do the right thing. Thus, Miriam is an awesome character, and it made me curious to look her up in real life. It turns out that Miriam may have been a real historical figure that is known to us today as Mary Hebrea. She is credited to being the first alchemist of the Western World.

Overall, this book is about responsibility, choices, and justice. I thought all the characters, except for Miriam were stereotypical. The mystery itself was a little underwhelming. There was little emphasis to the mystery itself. The reveal was glossed over. If you weren’t paying attention to the book, you would miss it within a blink of the eye. I thought the switching points of view between Miriam and Binyamin were unnecessary. Binyamin’s point of view seemed to be more for comic relief. The novel would have flown more easily had it stayed with Miriam’s point of view. Because The Deadliest Sport is the third book in the Miriam bat Issac mysteries, I was confused on who was who. I had to reread numerous paragraphs multiple times in order to understand Miriam and the other characters. I highly suggest that you read the first novel, The Deadliest Lie. Still, after reading this book, I’m curious to read the previous novels in this series. This novel is perfect for fans of Written in Ashes, Flow Down Like Silver: Hypatia of Alexandria, and Selene of Alexandria.

This is the official book trailer for The Deadliest Sport: