The Last Maharani of Gwalior: An Autobiography by Vinjaya Raje Scindia and Manohar Malgonkar: A Book Review 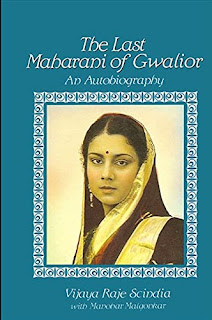 The Last Maharani of Gwalior: An Autobiography

Synopsis: A description of contemporary India and some of its recent history.

My Review: Vivjaya Raje Scindia was the last Maharani of Gwalior. She was a prominent member of the Indian parliament. She was jailed by Indira Gandhi during the Emergency period for opposing her presidency and even ran against her during the 1980 elections but lost. In her memoir, Vivjaya Raje Scindia chronicles her life from the moment of her birth to the elections of 1984.

Vivjaya Raje Scindia was descended from the Maharajas of Nepal. She went to a women’s college and intended to pursue a bachelor’s degree. However, her family had other plans for her and arranged her marriage to the Maharaja of Gwalior. Eventually, she entered into politics and joined the Indian parliament. After the death of her husband, she continued to be a member of parliament. However, she disagreed with Indira Gandhi’s rule. During the Emergency period, she became a prisoner. After a few years she was released. She ran against Indira Gandhi in 1980 but lost.

Before reading this memoir, I didn't really know anything about Indian history. However, the queen wrote about Gwalior’s history and its rulers in a very comprehensive way. I had never heard of this queen until I read her memoir, and I found it to be truly moving and sad. Vivjaya Raje Scindia had many tragic moments throughout her grand life as Maharani. She lost her husband. She lost her title as queen during Indira Gandhi’s presidency. She was a prisoner during the Emergency period, and she had a troubled relationship with her son due to political beliefs. Thus, I could not help but feel sorry for her.

Overall, this was a very moving memoir of a very important figure in India’s history. Vivjaya Raje Scindia was a queen who cared for her country and people. The story is very comprehensive to those who do not know much about Indian history. After reading her memoir, it makes me interested to read more about her. This is a must read for fans of royalty! The Last Maharani of Gwalior tells the story of one of India’s patriot heroes!