I am thrilled to be hosting a spot on the SHATTERED MIDNIGHT by Dhonielle Clayton Blog Tour hosted by Rockstar Book Tours. Check out my post and make sure to enter the giveaway! 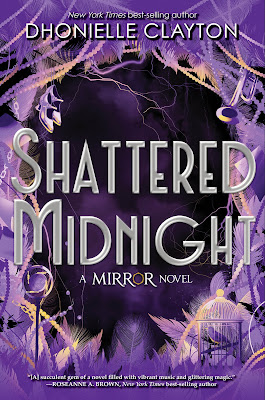 Source: This book was given to me by Rockstar Book Tours in exchange for an honest review.

Synopsis: The Mirror: Shattered Midnight is the second novel in the innovative four-book fairy-tale series written by Julie C. Dao, Dhonielle Clayton, J.C. Cervantes, and L. L. McKinney, following one family over several generations, and the curse that plagues it.

Zora Broussard has arrived in New Orleans with not much more than a bag of clothes, a beautiful voice, and a pair of enchanted red shoes. Running from a tragic accident caused by her magic, Zora wants nothing more than to blend in, as well as to avoid her overbearing aunt and mean-spirited cousins. Music becomes Zora’s only means of escape, yet she wonders if she should give it all up to remove the powers that make her a target, especially as a Black woman in the South.

But when Zora gets the chance to perform in a prominent jazz club, she meets a sweet white pianist named Phillip with magic of his own, including a strange mirror that foretells their future together. Falling into a forbidden love, Zora and Phillip must keep their relationship a secret. And soon the two discover the complicated connection between their respective families, a connection that could lead to catastrophe for them both. In the era of segregation and speakeasies, Zora must change her destiny and fight for the one she loves . . . or risk losing everything.

Shattered Midnight is the sequel to Broken Wish. Zora is living with her mean aunt and spoiled cousins in New Orleans. She sneaks out of the house to sing at jazz clubs. She falls in love with a new piano player named Phillip, but they cannot be together because they are of two different races. Could the two be together when society tries to pull them apart?

Zora is a very likable character. She had magic running through her veins. However, she doesn’t know how to control it. Because her magic was a mystery, she is afraid of it and wants to get rid of it. Throughout the novel, she struggles to accept who she is and comes to embrace her gift. I also find Zora to be a strong-willed character. She was always fighting for her love and happiness. I find the relationship between Zora and Phillip to be the most interesting. It is forbidden in the 1920s to have an interracial romance. They know the consequences of what would happen if they were caught. Yet, they are determined to fight society to be together. I could not help but wish for a happy ending for them!

Overall, this novel is about segregation, interracial romance and jazz music! The only things I did not like about this novel was that aside from Zora, the rest of the characters were not developed. Also, I would like more details about Zora’s magic! Still, this was a magical love story! The best part of the novel was the author’s lush descriptions of 1920s New Orleans. The setting quickly lulled me into the enchanting story! Shattered Midnight stayed with me long after I finished the last page! I can’t wait to read the sequel, which seems a long way from now! I recommend Shattered Midnight for fans of Evangeline of the Bayou, Labyrinth Lost, and These Violent Delights! 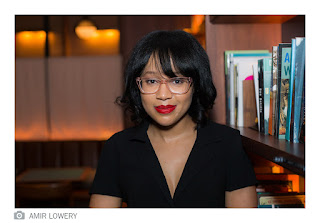 Dhonielle Clayton is a New York Times Bestselling author of The Belles series, the coauthor of the Tiny Pretty Things duology which debuts as a Netflix original series soon, and the author of the forthcoming MG fantasy series The Marvellers. She hails from the Washington, D.C. suburbs on the Maryland side. She taught secondary school for several years, and is a former elementary and middle school librarian. She is COO of the non-profit We Need Diverse Books, and co-founder of CAKE Literary, a creative kitchen whipping up decadent—and decidedly diverse—literary confections for middle grade, young adult, and women’s fiction readers. She’s an avid traveler, and always on the hunt for magic and mischief.

3 winners will receive a finished copy of SHATTERED MIDNIGHT, US Only.