The Women Who Built the Ottoman World: Female Patronage and the Architectural Legacy of Gulnus Sultan by Muzzafer Ozgules: A Book Review 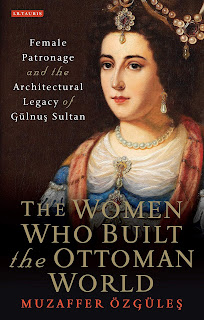 The Women Who Built The Ottoman World: Female Patronage and the Architectural Legacy of Gulnus Sultan

Publisher: I. B. Taurus

Synopsis: At the beginning of the eighteenth century, the Ottoman Empire remained the grandest and most powerful of Middle Eastern empires. One hitherto overlooked aspect of the Empire's remarkable cultural legacy was the role of powerful women - often the head of the harem, or wives or mothers of sultans. These educated and discerning patrons left a great array of buildings across the Ottoman lands: opulent, lavish and powerful palaces and mausoleums, but also essential works for ordinary citizens, such as bridges and waterworks. Muzaffer Ozgules here uses new primary scholarship and archaeological evidence to reveal the stories of these Imperial builders. Gulnus Sultan for example, the favourite of the imperial harem under Mehmed IV and mother to his sons, was exceptionally pictured on horseback, travelled widely across the Middle East and Balkans, and commissioned architectural projects around the Empire. Her buildings were personal projects designed to showcase Ottoman power and they were built from Constantinople to Mecca, from modern-day Ukraine to Algeria. Ozgules seeks to re-establish the importance of some of these buildings, since lost, and traces the history of those that remain. The Women Who Built the Ottoman World is a valuable contribution to the architectural history of the Ottoman Empire, and to the growing history of the women within it.

Gulnus Sultan was born on the island of Crete. She was from a noble family and her father was the Bishop of Rethymno. She was captured by the Ottomans and became a concubine to Mehmed IV. When she gave birth to Mustafa, she became his favorite. She accompanied him on military campaigns. Eventually, Mehmed IV was dethroned in favor of his brother. Eight years later, Gulnus became Queen Mother to her two sons who each became sultan. Gulnus Sultan was very influential in politics in the reigns of her husbands and sons. She was Mehmed IV’s favorite for 23 years and queen mother for 20 years. Yet, her greatest legacy was her building projects. Two of her building projects were the Galata New Mosque and the Uskudar Yeni Valide Complex.

Overall, this book provides a detailed account of Gulnus Sultan’s life and her legacy. I like how the author analyzes each of the building projects. I also like how the author discussed the building projects of her predecessors and her successors. It was very interesting to see where Gulnus Sultans fits in with her building projects. Thus, there is no doubt that Gulnus Sultan was a very powerful and influential figure in the Ottoman Empire. The Women Who Built The Ottoman World is a must-read for those interested in Ottoman history. It illuminates the life and legacy of a largely forgotten figure and restores her place as a remarkable queen in her own right.