Deborah: The Prophetess of God by H.B. Moore: A Book Review 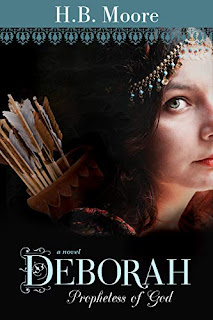 Deborah: The Prophetess of God

Synopsis: After years of mistreatment, the Israelites prepare to defend themselves against the oppressive Canaanites. Readying for war not only takes secret military training but also an Israelite leader who is willing to both stand against generations of oppressions and follow God.

Deborah, a young Israelite woman, lives a quiet and isolated life with her father and brothers. As a shepherdess in the hills near her home, she knows well the perils of her work. But when faced with incredible danger, she witnesses a series of remarkable events that preserve her life. The hand of the Lord is apparent, and it is clear that hers will be no ordinary life.

Years later, Deborah is a faithful wife and mother when she learns that the Third Judge of Israel has died and she has been called to take his place. It is a tumultuous time in history, and soon, Deborah prophetess, judge, and military leader faces a seemingly insurmountable task: alongside the commander of the Israelite army, Deborah must lead ten thousand soldiers in their final campaign against their Canaanite oppressors with only her faith in God to guide her.

My Review: Deborah is one of the most extraordinary women in the Bible. She was the only female judge in The Bible and was a prophetess who successfully led a rebellion against King Jabin. Because Deborah’s story is one of courage and faith, renowned Christian author, H. B. Moore spins her own take on Deborah. In this version, Mrs. Moore chronicles Deborah’s story from her courtship with Lapidoth to when she becomes one of Israel’s greatest leaders.

In this version, Deborah is portrayed as a tomboy. She learned archery alongside her brothers at an early age. She is feisty and is tough-as nails. She is capable of defending herself. She is bold, mischievous, and can outwit her enemies. Thus, Deborah is portrayed as a modern heroine. She does not have any flaws. I found this Deborah to be very unrealistic to her historical counterpart. I could not help but compare Mrs. Moore’s version of Deborah to Jill Eileen Smith’s version of Deborah. I found Mrs. Smith’s version to be more likable because while Deborah was strong-willed, she had her flaws. Thus, Mrs. Smith’s version was more realistic and relatable than Mrs. Moore’s version because she seemed perfect and unrealistic.

Overall, this novel is about love, faith, and choices. I found that Barak’s story overshadowed Deborah’s story. It felt as if Barak was the main character in the book rather than Deborah. The rest of the characters were flat and were not given any character development. I was also annoyed by how the author’s kept a modernized version of their names rather than using their historical names. One example is Lapi for Lapidoth. It made me cringe I every time I read his name. The novel’s strength is her setting. I found the author’s vivid details made ancient Israel come alive. Thus, I was really disappointed in this version of Deborah. I have loved H.B. Moore’s novels, especially Anna the Prophetess, and Ruth. However, Mrs. Moore did not do Deborah justice. For a more superior version of the infamous Deborah, I recommend The Prophetess by Jill Eileen Smith.