By Her Own Design by Piper Huguley: A Book Review 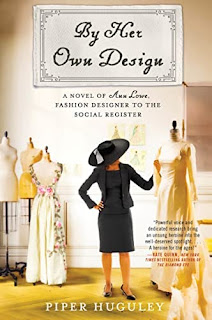 By Her Own Design: A Novel of Ann Lowe, Fashion Designer to the Social Register
Author: Piper Huguley
Genre: Historical Fiction
Publisher: William Morrow Paperbacks
Release Date:  June 7, 2022
Pages: 384
Source: Netgalley/Publisher in exchange for an honest review.
Synopsis: The incredible untold story of how Ann Lowe, a Black woman and granddaughter of slaves, rose above personal struggles and racial prejudice to design and create one of America's most famous wedding dresses of all time for Jackie Kennedy.

Less than a week before the society wedding of the year where Jacqueline Bouvier will marry John F. Kennedy, a pipe bursts at Ann Lowe’s dress shop and ruins eleven dresses, including the expensive wedding dress, a dress that will be judged by thousands. A Black designer who has fought every step of the way, Ann knows this is only one struggle after a lifetime of them. She and her seamstresses will find the way to re-create the dresses. It may take all day and all night for the next week to accomplish the task, but they will do it.

Raised in Jim Crow Alabama, Ann learned the art of sewing from her mother and her grandmother, a former slave, who are the most talented seamstresses in the state. After Ann elopes at twelve with an older man who soon proves himself to be an abusive alcoholic, her dreams of becoming a celebrated designer seem to be put on hold. But then a wealthy Tampa socialite sees Ann’s talent and offers her an amazing opportunity—the chance to sew and design clothing for Florida’s society elite. Taking her young son in the middle of the night, Ann escapes her husband and embarks on the adventure of a lifetime.

Based on the true story of one of the most famous designers of the twenties through the sixties who has since been unjustly forgotten, By Her Own Design is an unforgettable novel of determination despite countless obstacles and a triumph celebrated by the world.

My Review: By Her Own Design is a biographical novel of Ann Lowe, who was the first African American to be a renowned fashion designer. She was most notable for designing the dress of Jacqueline Kennedy. Ann Lowe was born and raised in Alabama. One day in a department store in Dothan, a rich woman noticed Ann’s dress and asked her to make dresses for her daughters. Under her benefactor, Ann was given the opportunity to attend school and fashion her craft. She quickly became one of the most successful designers of her time.

I had never heard of Ann Lowe so I found this to be a very engrossing read. Ann came from a family of accomplished fashion designers. She had always dreamt of establishing her own shop as a young girl. However, Ann’s childhood was very traumatic. At twelve years old, she married a man that was almost three times her age. He was very controlling and abusive. When the opportunity came her way, she did not hesitate to cease it. Ann worked tirelessly to make her dreams come true. She loved designing and never gave up. She was hardworking, artistic, humble, and had a strong faith in God that would help her through all of her difficulties. Therefore, Ann was a very compelling character.

Overall, this novel brought to light a long forgotten figure. I found all the characters to be very complex. However, there were a few graphic scenes in the beginning that made me uncomfortable to read but the rest of the novel focuses on Ann’s relationship with her clients. I loved learning about her designs, especially how she designed Jacqueline Kennedy’s dress. The story was very well-written, and it showed the prejudices that Ann Lowe faced as she strives for success. Ann made many sacrifices to pursue her dream, but her greatest love was her art. By Her Own Design is an enthralling read for fans of the Kennedys because there were a lot of focus on Jacqueline Kennedy before her marriage to JFK. I recommend this novel for fans of The Gown, A Dress of Violet Taffeta, and The Paris Dressmaker!