The Key to Deceit (Electra McDonnell #2) by Ashley Weaver: A Book Review 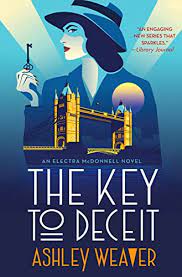 London, 1940. After years of stealing from the rich and giving to the poor—well, to themselves, anyway—Ellie McDonnell and her family have turned over a new leaf as they help the government’s war effort. It’s true that the straight-laced Major Ramsey didn’t give them much choice, but still, Ellie must admit she doesn’t miss breaking and entering as much as she might have thought. What she does miss is the challenge of unlocking an impossible code and the adrenaline rush that comes from being somewhere she shouldn’t.

So when Major Ramsey turns up unannounced with another job, she can’t say no. A woman’s body has been found floating in the Thames, with a bracelet locked onto her wrist, and a cameo locket attached to it. It’s clear this woman was involved in espionage, but whose side was she on? Who was she reporting to? And who wanted her dead?

My Review: The Key to Deceit is the second book in the Electra McDonnell series. A woman’s body has been found floating on the Thames. The jewelry that was found on her turns out to be spy objects. Ellie is hired to investigate the case to see which side the woman was spying on. She also explores the motive for why someone wanted her dead.

One of my main issues that I had with A Peculiar Combination was that I strongly disliked Ellie McDonnell. I found her to be an annoying character. I had hoped that Ellie would grow in the second novel. However, I was very disappointed to discover there was no character growth. Ellie still acted like a spoiled teenager. She came off as whiny. Thus, she was not particularly charming, and I did not know why two men were interested in her. I also found her to be very indecisive and selfish when it came to her romance. Ellie did not know which man she was in love with and spent the novel flirting with both of them behind the other’s back. It was like she wanted to have her cake and eat it too. Therefore, while I found her to be annoying in the first novel, this book made her insufferable.

Overall, this novel is about spies, war, and choices. I did not like some of the secondary characters, and the mystery was not the best part of the novel. On the positive side, I found The Key to Deceit to be meticulously researched and was full of vivid details of WWII. I am still willing to give this series a chance and hope that Ellie will finally act like a more mature woman than a spoiled teenager. I recommend this novel for fans of Jacqueline Winspear, Anna Lee Huber, and Kate Parker!