The Girl Who Fell Beneath the Sea by Axie Oh: A Book Review 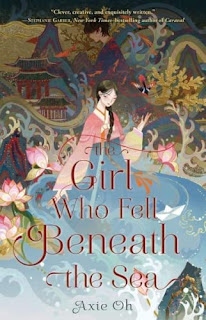 Deadly storms have ravaged Mina’s homeland for generations. Floods sweep away entire villages, while bloody wars are waged over the few remaining resources. Her people believe the Sea God, once their protector, now curses them with death and despair. In an attempt to appease him, each year a beautiful maiden is thrown into the sea to serve as the Sea God’s bride, in the hopes that one day the “true bride” will be chosen and end the suffering.

Many believe that Shim Cheong, the most beautiful girl in the village―and the beloved of Mina’s older brother Joon―may be the legendary true bride. But on the night Cheong is to be sacrificed, Joon follows Cheong out to sea, even knowing that to interfere is a death sentence. To save her brother, Mina throws herself into the water in Cheong’s stead.

Swept away to the Spirit Realm, a magical city of lesser gods and mythical beasts, Mina seeks out the Sea God, only to find him caught in an enchanted sleep. With the help of a mysterious young man named Shin―as well as a motley crew of demons, gods and spirits―Mina sets out to wake the Sea God and bring an end to the killer storms once and for all.

But she doesn’t have much time: A human cannot live long in the land of the spirits. And there are those who would do anything to keep the Sea God from waking…

My Review: One night, Mina follows her brother to save the girl he loves. In order to help her brother, Mina sacrifices her life to become the Sea God’s bride. Under the sea, she finds a kingdom that has been ruined by political turmoil. She also discovers that the Sea God has been sleeping for many years. Can Mina find a way to wake the Sea God and save the kingdom?

Mina is a very fascinating character. She loves her family and will protect them no matter the cost. She is a very compassionate person who cares for others. She is very optimistic and sticks to her personal beliefs. It is because of her faith in others and in herself that she changes those around her. She is also mature and intelligent. These qualities help make her an appealing heroine. Thus, Mina is an engaging and complex protagonist whom I rooted for throughout the novel to find her own happy ending.

Overall, this novel is about family, sacrifice, and choices. I found all the characters to be very complex and likable. There were a few drawbacks to the novel. I thought the middle was very slow moving and seemed to be drawn out. There were also a few questions that were left unanswered. The romance was very lackluster. Because the love story is the central point to the novel, I would  have loved it if the author took more time to focus on the romance’s development. Instead, it came across as forced. Despite these flaws, the world-building of the kingdom beneath the sea seemed very magical, and I loved learning more about this magnificent realm. The Girl Beneath the Sea is a gorgeous fairytale that enthralls the reader from its first page. I recommend this novel for fans of Six Crimson Cranes, The Ghost Bride, and Descendant of the Crane!