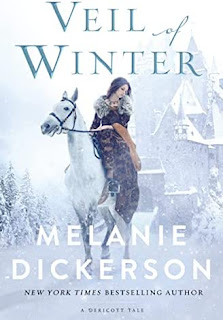 Synopsis: She’s hounded from every side by treacherous elements and foes, but her greatest enemy lies within.

In the mountains near France, the medieval Princess Elyce is being forced to marry, thus forming an alliance that will enrich her father but enslave her kingdom. Instead, she chooses to feign her death and flee to Prague to beg King Wenceslaus to help save her people.

In England, the young knight Sir Gerard has a vision from God instructing him to help Elyce on her quest. When he arrives to find she has been near death for days, he manages to revive her. However, thinking the stranger was trying to kiss her, the princess immediately distrusts him. But her desperate situation forces her to accept his aid.

Pursued by her enemy’s guards over mountainous terrain, they must also battle the deadly winter elements. Her greatest challenge may be to overcome the voices of disapproval and accusation from her childhood. Will her emotions lead her into her true identity, or will they undermine her ability to work with Gerard and to save her people, who desperately need her help?

My Review: Veil of Winter is the third installment in the Dericott Tale series and is a retelling of Sleeping Beauty. Princess Elyce’s father has formed an alliance that will bring prosperity to her father but enslave her people. The terms of the alliance is that Princess Elyce must marry. Princess Elyce is against the marriage alliance and wants to ask King Wenceslaus for help. She fakes her own death and sets out on her journey to Prague. She is accompanied by Ser Gerard who is instructed to protect her at all costs.

I found Princess Elyce to be an unlikable character. She was very annoying and irritating throughout most of the novel. She is cold and is mean to everyone around her. She treats Sir Gerard horribly for no reason. She doesn’t respect him and often uses him. Therefore, I found their romance to be unconvincing, and I did not believe she deserved him. Thus, Princess Elyce was mostly a passive and weak character. I found it hard to empathize with her and root for her.

Overall, this novel is about hope, love, and faith. The message of the story is to always embrace your emotions because they are part of what God has made you. There is very little character development. Sir Gerard is the perfect hero, and the villains are the cartoonish bad guys. The story moves at an evenly pace, but the ending was rushed. The setting is the best part of the novel because the wintry landscapes feel like a fairytale. This novel is a sweet and light read for those that like fairytale romances. However, I found Mrs. Dickerson’s other Sleeping Beauty retelling called The Healer’s Apprentice to be more enjoyable. Still, I recommend this for fans of Jody Hedlund, Nadine Brandes, and Tamara Leigh!