The Last Princess by Shelley Wilson: A Book Review 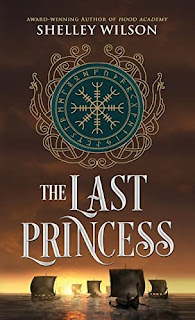 Edith still has much to learn about the art of ruling a kingdom, but when her family is murdered, she's faced with the challenge of staying alive.

As a young woman in Anglo-Saxon England, Edith finds it hard to be heard above the Eldermen who are ripping the kingdom to pieces, but nothing can prepare her for the arrival of the pirates and the Vikings. Torn from her homeland and sold into slavery, she's determined to survive at any cost.

Finding allies in the unexpected and enemies closer to home, Edith clings to her dream of returning home one day to reclaim her throne and to exact revenge on those who harmed her family.

My Review: Edith is a princess of Northumbria. She is her father’s chosen heir because her father has no sons. One night, her parents and sisters are killed by pirates. Her uncle becomes king of Northumbria and marries Edith to an old man. A few days later, her husband is killed and Edith becomes a slave to the Vikings. Under the hands of the Vikings, she trains as a warrior. While she is accustomed to her new life in Viking territory, she continues to harbor the dream of becoming queen of Northumbria. Would Edith ever take the throne back from her uncle and become the queen her father always wanted to be?

Edith is a strong protagonist. She has been raised to be the next queen of Northumbria. Therefore, she strategically makes political moves to help her to become queen. Even when she has nothing left and is in enemy territory, she continues to make political decisions. The only time she is not thinking of politics is when she marries for love. Edith is also understandably angry for what has happened to her family and wants vengeance. I found Edith to not only be a hardened warrior in the novel but also a survivor. She goes through so many tragedies but she becomes more determined, assertive, and confident. Thus, I was rooting for her all the way to find her own personal happiness.

Overall, this novel is about different cultures, acceptance, and survival. The story is very fast-paced and is full of political intrigue. I did find all of the characters to be very stereotypical with little character development. I found the romance to be forced and instantaneous with shallow depth. Many parts of the book seemed rushed. Still, I found the depiction of the Vikings to be very fascinating. The setting of both England and Germany was very well-written, and it is full of vivid historical details. The Last Princess is an enthralling read for those that love reading about the Vikings. I recommend this for fans of Shield-Maiden: Under the Howling Moon, The Norse Queen, and Rise of the Shieldmaiden!