An Indiscreet Princess: A Novel of Queen Victoria's Defiant Daughter by Georgie Blalock: A Book Review 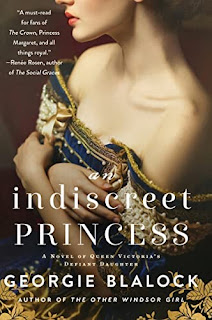 Synopsis: Before Princess Margaret, before Duchess Meghan, there was Princess Louise: royal rebel.

As the fourth daughter of the perpetually in-mourning Queen Victoria, Princess Louise’s life is more a gilded prison than a fairy tale. Expected to sit quietly next to her mother with down-cast eyes, Louise vows to escape the stultifying royal court. Blessed with beauty, artistic talent, and a common touch, she creates a life outside the walled-in existence of the palace grounds by attending the National Art Training School—where she shockingly learns to sculpt nude models while falling passionately in love with famed sculptor Joseph Edgar Boehm.

But even as Louise cultivates a life outside the palace, she is constantly reminded that even royal rebels must heed the call of duty—and for a princess that means marriage. Refusing to leave England, she agrees to a match with the Duke of Argyll, and although her heart belongs to another, she is determined to act out her public role perfectly, even if her private life teeters on the brink of scandal. But when a near fatal accident forces Louise back under her mother’s iron rule, she realizes she must choose: give in to the grief of lost love or find the strength to fight for her unconventional life.

My Review: Princess Louise was Queen Victoria’s most scandalous daughter. Her indiscreet behavior shocked the Victorian era. She was famous for her many liaisons, her artwork, and her marriage to a commoner. An Indiscreet Princess  tells the story of how Princess Louise strives to be an artist. She enrolls with an art school and falls in love with her teacher. However, Princess Louise must adhere to the expectations of a royal princess. Princess Louise must choose between love or duty.

I read this novel right after reading Heather B. Moore’s fabulous novel, In the Shadow of a Queen. I was excited to read it to get a different perspective on Princess Louise. This novel did not disappoint, and I read it in one sitting. An Indiscreet Princess focused on Princess Louise’s time in school and her ill-fated romance with her art teacher. Princess Louise was still a sympathetic character. She yearned for the freedom to pursue her passion for art and love. However, her mother found her profession and her suitor to be very unsuitable for a princess. Princess Louise was determined to live her life according to her own terms. I found Princess Louise to be a very strong woman and an engaging heroine. Thus, I enjoyed Mrs. Blalock’s version of Princess Louise.

Overall, this novel was about freedom, love, and duty. I found all the characters to be very complex. I like how Mrs. Blalock included Princess Louise’s letters into the story. The story was well-written, meticulously researched, and filled with vivid imagery. After reading In the Shadow of a Queen, I did wish that An Indiscreet Princess would begin with Princess Louise as a child instead of an adult. I also found the beginning to be very slow. Still, it was a very compelling and engaging read! This novel is a must read for royal fans! I recommend this novel for fans of I, Victoria, The Wild Princess, and A Most English Princess! An Indiscreet Princess is a delightful tribute to Princess Louise, Queen Victoria’s most enigmatic daughter!