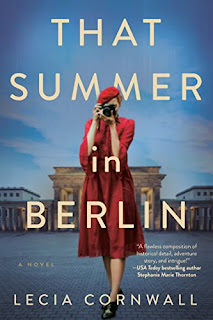 That Summer in Berlin

Synopsis: In the summer of 1936, while the Nazis make secret plans for World War II, a courageous and daring young woman struggles to expose the lies behind the dazzling spectacle of the Berlin Olympics.

German power is rising again, threatening a war that will be even worse than the last one. The English aristocracy turns to an age-old institution to stave off war and strengthen political bonds—marriage. Debutantes flock to Germany, including Viviane Alden. On holiday with her sister during the 1936 Berlin Olympics, Viviane’s true purpose is more clandestine. While many in England want to appease Hitler, others seek to prove Germany is rearming. But they need evidence, photographs to tell the tale, and Viviane is a genius with her trusty Leica. And who would suspect a pretty, young tourist taking holiday snaps of being a spy?

Viviane expects to find hatred and injustice, but during the Olympics, with the world watching, Germany is on its best behavior, graciously welcoming tourists to a festival of peace and goodwill. But first impressions can be deceiving, and it’s up to Viviane and the journalist she’s paired with—a daring man with a guarded heart—to reveal the truth.

But others have their own reasons for befriending Viviane, and her adventure takes a darker turn. Suddenly Viviane finds herself caught in a web of far more deadly games—and closer than she ever imagined to the brink of war.

My Review: Viviane is on holiday in Berlin during the Olympic Games. She is officially there as a tourist, but is secretly a British spy. She is paired with Tom Graham who is a journalist and spy. She is tasked to photograph pictures to see the harsh reality of Germany. As the Olympics eventually draw to a close, Vivian’s and Tom are in danger of being discovered. Could the two manage to successfully pull off their mission or would they suffer at the hands of Germany?

I really like Viviane. She was a very fun character. She was bold, courageous, and clever. She also took her role as a spy very seriously. I love how she cares for those she loves and often puts them first before herself. Therefore, Viviane is a very compassionate and caring person which is what I like most about her. Thus, I rooted for Viviane, and she was my favorite character in the novel.

I did not really care for her romance with Tom Graham. Tom is the stereotypical male lead. He is handsome, dashing, and charming. He at first dislikes Viviane for a silly reason, but eventually falls in love with her. Thus, I would have liked it if there was no romance at all because it seemed very lackluster. I did not find Tom to be an engaging hero.

Overall, this novel is about truth, justice, and discrimination. Besides Viviane and the villian, I found all the other characters to be bland with no real-depth. I wish that there were more references to the Olympics. It was merely a backdrop with a few references. I would like to explore the events of the Olympics and the tension of how the competing athletes may have felt participating in Berlin’s Olympics. I also wish that Viviane did more spying and was given more than one mission. Still, the novel had enough glitz and glamor to keep me engrossed in the story. I also like the King Arthur references in the novel. The story is very well-written and is full of vivid imagery. I found the setting of the Berlin Olympics to be very unique and kept me engaged. I recommend That Summer in Berlin for fans of A Game of Lies, Fast Girls, and Code Name Helene!