The Last Crown (The Bold #2) by Elżbieta Cherezińska: A Book Review 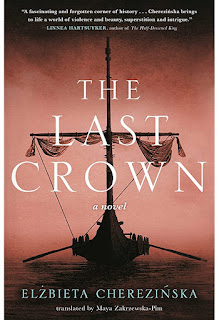 Synopsis: Across Baltic shores, English battlegrounds, and the land of Northern Lights, The Last Crown is the follow up to The Widow Queen, and the epic conclusion of Swietoslawa's journey from Polish princess to Queen of Denmark & Sweden and Queen Mother of England.

The web of love and lies is thicker than ever as we reunite with players spread across the board of Europe in this sequel to The Widow Queen. Our heroes and enemies alike are beholden to the hands of fate.

While Olav Tryggvason reclaims the throne of Norway and baptizes the land by blood, King Sven in Denmark is filled with rage at his once comrade. Not only does Olav threaten Sven’s hold on Norway, but his hold on his own wife -- the woman with two crowns, three sons, and a heart long spoken for. Swietoslawa, the Bold One.

Meanwhile, those Swietoslawa trusts most -- Astrid, her sister, Sigvald, her brother-in-law and head of the Jomsvikings, and even her own son, Olaf -- take shocking, selfish action, with consequences that will reverberate for years to come.

For the storm of unrequited love destroys all in its path.

My Review: The Last Crown is the sequel to The Widow Queen. This novel picks up immediately after the first one ends. Swietoslawa has been crowned Queen of Denmark and Sweden. This novel chronicles her rise to Queen of Norway and England. It also tells how she became the Queen Mother of England.

Swietoslawa is a very fascinating character. She shines throughout the novel. She is feisty, fearsome, and strong. She is also shrewd and manipulative. She is very skilled in politics. Therefore, she wins the respect and admiration of the men around her. I found her fascinating and rooted for her as she became queen of four countries and the mother of kings. I especially love the novel’s depiction of her as a formidable queen who had lynxes as pets. Thus, Swietoslawa was one of my favorite characters, and her story was very intriguing. The novel showed her not only as a queen but the familial roles she played throughout the story as a wife, mother, sister, and aunt.

Overall, this novel is about religion, family, and love. I found the large cast of characters to be well-developed and complex. The things that I did not like about this book was I found the many battles to be very repetitive and a slog to read. I also found the middle to be a filler until the end. I also thought that due to its length, this novel was very drawn out and should have been shortened by a couple hundred pages. Still, I did enjoy the epic. There was a lot of political and courtly intrigue to keep me turning the pages. I did not know who Swietoslawa was, and her story of how she became queen of four countries was very mesmerizing! She led a very colorful life! I also had never heard of the Piast Dynasty, and it was interesting reading about their dynasty! Thus, The Widow Queen and The Last Crown was a welcome break away from the Tudors and the Plantagenets! I recommend this novel for fans of The Unbroken Line of the Moon, Shadow on the Crown, and The Forever Queen!