In the Shadow of a Queen by Heather B. Moore: A Book Review 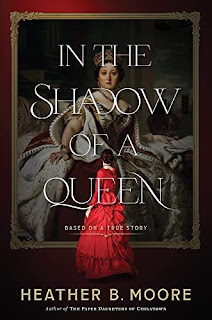 Synopsis: Based on the true story of the free-spirited daughter of Queen Victoria.

Princess Louise’s life is upended after her father’s untimely death. Captive to the queen’s overwhelming mourning, Louise is forbidden to leave her mother’s tight circle of control and is eventually relegated to the position of personal secretary to her mother―the same position each of her sisters held until they were married.

Already an accomplished painter, Louise risks the queen’s wrath by exploring the art of sculpting, an activity viewed as unbefitting a woman. When Louise involves herself in the day’s political matters, including championing the career of a female doctor and communicating with suffragettes, the queen lays down the law to stop her and devotes her full energy to finding an acceptable match for her defiant daughter.

Louise is considered the most beautiful and talented daughter of Queen Victoria, but finding a match for the princess is no easy feat. Protocols are broken, and Louise exerts her own will as she tries to find an open-minded husband who will support her free spirit.

In the Shadow of a Queen is the story of a battle of wills between two women: a daughter determined to forge her own life beyond the shadow of her mother, and a queen resolved to keep the Crown’s reputation unsullied no matter the cost.

Overall, this novel is about family, choices, and love. I found all the characters to be very fascinating. I like how the author inserts Princess Louise’s diaries into the story. I also like how a portion of the novel focuses on Princess Louise’s teenage years. It fully fleshed out her character and gave a better understanding of how she made her decisions as an adult. The story is well-written and is meticulously researched. It seems like an intimate look not only at Princess Louise but also the royal family. The only thing I did not like about this book is that it has some slow parts. Nevertheless, this is a very engrossing and compelling read! I found Princess Louise’s story so engrossing that I read it one sitting. This novel is a must-read for fans of royalty. I recommend this novel for those who love Victoria, My Name is Victoria, and My Dearest, Dearest Albert! In the Shadow of a Queen is an enchanting tribute to Queen Victoria’s most free-spirited daughter.