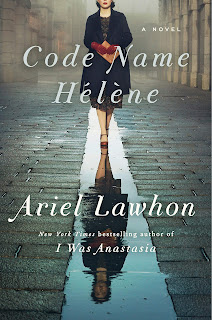 Synopsis: BASED ON THE THRILLING REAL-LIFE STORY OF SOCIALITE SPY NANCY WAKE, comes the newest feat of historical fiction from the New York Times bestselling author of I Was Anastasia, featuring the astonishing woman who killed a Nazi with her bare hands and went on to become one of the most decorated women in WWII.

Told in interweaving timelines organized around the four code names Nancy used during the war, Code Name Hélène is a spellbinding and moving story of enduring love, remarkable sacrifice and unfaltering resolve that chronicles the true exploits of a woman who deserves to be a household name.

It is 1936 and Nancy Wake is an intrepid Australian expat living in Paris who has bluffed her way into a reporting job for Hearst newspaper when she meets the wealthy French industrialist Henri Fiocca. No sooner does Henri sweep Nancy off her feet and convince her to become Mrs. Fiocca than the Germans invade France and she takes yet another name: a code name.

As LUCIENNE CARLIER Nancy smuggles people and documents across the border. Her success and her remarkable ability to evade capture  earns her the nickname THE WHITE MOUSE from the Gestapo. With a five million franc bounty on her head, Nancy is forced to escape France and leave Henri behind. When she enters training with the Special Operations Executives in Britain, her new comrades are instructed to call her HÉLÈNE. And finally, with mission in hand, Nancy is airdropped back into France as the deadly MADAM ANDRÉE, where she claims her place as one of the most powerful leaders in the French Resistance, armed with a ferocious wit, her signature red lipstick, and the ability to summon weapons straight from the Allied Forces.

But no one can protect Nancy if the enemy finds out these four women are one and the same, and the closer to liberation France gets, the more exposed she--and the people she loves--become.

My Review: Nancy Wake is one of WWII’s most recognizable spies. There have been movies and television shows based on her. In Code Name Helene, Mrs. Lawhon attempts to retell her story through the four operations she worked with through her code names. Nancy Wake has been under operations using different pseudonyms. Will the enemy ever find out that these four pseudonyms are the same woman?

Nancy Wake is a fascinating historical figure in her own right. She started out as a journalist. Eventually, she became a socialite and a spy for the Resistance. She worked tirelessly to free many allied forces and Jews. She even killed a German with her bare hands. With a larger-than-life historical figure, Mrs. Lawhon certainly had juicy material to work with. Nancy Wake is indeed an admirable protagonist. Mrs. Lawhon proves that she is an incredibly brave and daring woman. She is a woman that fights for justice. She is also independent and can stand on her own against male chauvinism. Through her bravery, she begrudgingly earns the admiration and respect from her male colleagues. Thus, Nancy Wake is a perfect heroine whose only flaw is that she cannot get enough of her red lipstick.

Overall, this novel is about courage, choices, and inner strength. Besides Nancy Wake, I found all the characters, especially her husband, to be flat. I thought the beginning was slow and parts of the novel were drawn out. Therefore, I would have loved it more if it was shorter. I also had a hard time keeping her story together because it was written in a non-linear format. It would have been more comprehensible if the story was told in a linear format. Still, Code Name Helene does justice to a captivating woman! I hope that there will be more books written about her! I recommend Code Name Helene for fans of The Alice Network, Resistance Woman, and Code Name Verity!

Blog Tour: Release Blitz of Our Last Days in Barcelona by Chanel Cleeton

May 24, 2022
Our Last Days in Barcelona Author: Chanel Cleeton Historical Fiction Publisher: Berkley Pages: 320 Synopsis: Barcelona, 1964 . Exiled from Cuba after the revolution, Isabel Perez has learned to guard her heart and protect her family at all costs. After Isabel’s sister Beatriz disappears in Barcelona, Isabel goes to Spain in search of her. Joining forces with an unlikely ally thrusts Isabel into her sister’s dangerous world of espionage, but it’s an unearthed piece of family history that transforms Isabel’s life.      Barcelona, 1936 . Alicia Perez arrives in Barcelona after a difficult voyage from Cuba, her marriage in jeopardy and her young daughter Isabel in tow. Violence brews in Spain, the country on the brink of civil war, the rise of fascism threatening the world. When Cubans journey to Spain to join the International Brigades, Alicia’s past comes back to haunt her as she is unexpectedly reunited with the man who once held her heart.      Alicia and Isabel’s lives intertwine, and
1 comment
Read more