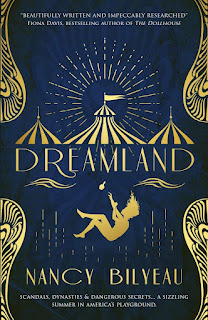 Synopsis: The year is 1911 when twenty-year-old heiress Peggy Batternberg is invited to spend the summer in America’s Playground.

The invitation to Coney Island is unwelcome. Despite hailing from one of America’s richest families, Peggy would much rather spend the summer working at the Moonrise Bookstore than keeping up appearances with New York City socialites and her snobbish, controlling family.

But soon it transpires that the hedonism of Coney Island affords Peggy the freedom she has been yearning for, and it’s not long before she finds herself in love with a troubled pier-side artist of humble means, whom the Batternberg patriarchs would surely disapprove of. Disapprove they may, but hidden behind their pomposity lurks a web of deceit, betrayal, and deadly secrets. And as bodies begin to mount up amidst the sweltering clamor of Coney Island, it seems the powerful Batternbergs can get away with anything… even murder.

Extravagant, intoxicating, and thumping with suspense, bestselling Nancy Bilyeau’s magnificent Dreamland is a story of corruption, class, and dangerous obsession.

My Review: Peggy is a member of one of America’s richest families. Her family is on a summer holiday at the Oriental Hotel, which is a mile from Coney Island. Peggy is forced to leave her job at a bookstore and join her family. Shortly after her arrival, a woman is murdered at Coney Island. Can Peggy find the killer while also falling in love with an artist?

Peggy is a fun character. She is feisty and bold. She is a young woman that yearns to break out of her wealthy social circle and become an independent woman. Throughout the novel, she struggles to find her own happiness. She wants to make her own choices rather than let her family define her. I also love the relationship between her and her sister. She cares for her and helps her a lot. I also found her to be a smart, capable heroine who could solve the crimes around Coney Island. Thus, Peggy was the best character in the novel and a person to root for!

Overall, this novel is about finding one’s place in the world. Aside from Peggy, I found the characters to be very stereotypical. The romance between Peggy and the artist was undeveloped and mostly felt like an instant romance. The novel was also focused more on political issues in the early 1900s, which tended to distract me from the main plot. The mystery was predictable, and I guessed the killer pretty early in the story. Still, the novel is very well-written, and the author did an excellent job of making Coney Island come alive! I recommend this book for fans of The Museum of Extraordinary Things, Murder on Astor Place, and Cartier’s Hope! Dreamland is an enjoyable cozy mystery for a hot summer afternoon!