The Queen of Paris: A Novel of Coco Chanel by Pamela Binnings Ewen: A Book Review 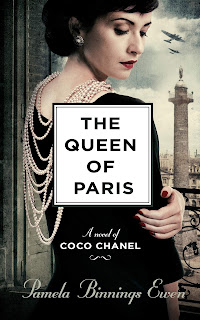 The Queen of Paris: A Novel of Coco Chanel
Author: Pamela Binnings Ewen

Synopsis: Legendary fashion designer Coco Chanel is revered for her sophisticated style -- the iconic little black dress -- and famed for her intoxicating perfume Chanel No. 5. Yet behind the public persona is a complicated woman of intrigue, shadowed by mysterious rumors. The Queen of Paris, the new novel from award-winning author Pamela Binnings Ewen, vividly imagines the hidden life of Chanel during the four years of Nazi occupation in Paris in the midst of WWII -- as discovered in recently unearthed wartime files.

Coco Chanel could be cheerful, lighthearted, and generous; she also could be ruthless, manipulative, even cruel. Against the winds of war, with the Wehrmacht marching down the Champs-Élysées, Chanel finds herself residing alongside the Reich's High Command in the Hotel Ritz. Surrounded by the enemy, Chanel wages a private war of her own to wrestle full control of her perfume company from the hands of her Jewish business partner, Pierre Wertheimer. With anti-Semitism on the rise, he has escaped to the United States with the confidential formula for Chanel No. 5. Distrustful of his intentions to set up production on the outskirts of New York City, Chanel fights to seize ownership. The House of Chanel shall not fall.

While Chanel struggles to keep her livelihood intact, Paris sinks under the iron fist of German rule. Chanel -- a woman made of sparkling granite -- will do anything to survive. She will even agree to collaborate with the Nazis in order to protect her darkest secrets. When she is covertly recruited by Germany to spy for the Reich, she becomes Agent F-7124, code name: Westminster. But why? And to what lengths will she go to keep her stormy past from haunting her future?

My Review: Coco Chanel is one of history’s most fashionable icons. This novel focuses on Coco Chanel’s life during the four years when the Nazis occupied France. She collaborated with the Nazis and even became their spy. Thus, Coco Chanel was willing to do anything to protect her business no matter the cost.

Coco Chanel has always been a fascinating historical figure. This novel focuses on the years that have been little focused on by historians. In this book we get to see a dark side of the glamorous Coco Chanel. Coco Chanel is not a likable character. Even though she is the main character of this book, she is an anti-heroine. She is cold and ruthless. She did horrible things with very little regret. She was anti-Semitic and a spy for the Nazis. Thus, I did not feel any sympathy for Coco Chanel and found her actions to be abhorrent.

Overall, this novel shows the cosmopolitan Coco Chanel as a complex woman who made many terrible decisions. I admire how the author did not sugarcoat Coco Chanel’s actions and personalities. She showed her how she truly may have been. While the novel tries to be sympathetic to Coco Chanel and tries to explain why she joined the Nazis, I found her reasons to be trivial. Still, the book does show how Coco Chanel was an acute business woman. She cares about her family and her business. The Queen of Paris is very well-written and is filled with many sumptuous details about Paris. There is still plenty of glitz and glamor that Coco Chanel is known for within these pages. I recommend this for fans of The Socialite, The German Heiress, and The Paris Secret! The Queen of Paris is a book that must not be missed for any Coco Chanel fan!

This is the official book trailer of The Queen of Paris by Pamela Binnings Ewen: